India is the largest producer of Millets in the world: Experts 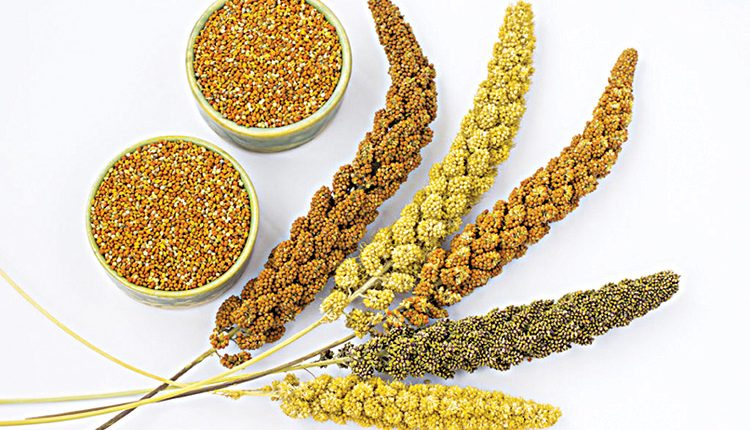 New Delhi, Oct 21 (FN Representative) Department of Plant Science, Central University of Himachal Pradesh, Shahpur Premises on Thursday Organized a Seminar on “Millets: Food for Future”. The seminar was organized under the guidance of Dean, School of Life Sciences, Head, Department of Plant Science and Dean Academics. The guest speaker was Dr. Gopal Katna, Principal Scientist (Plant Breeding), Department of Organic Agriculture and Natural Farming, COA, CSK HPKV Palampur, H.P. All the faculty members, Research Scholars, and Postgraduate students were present in the seminar. The seminar’s main objective was to acquire knowledge about the Importance of the Millet. He shared his valuable knowledge about the millets and their scopes in the upcoming future.

He explained why millets are called supper food? Millets are called the “Miracle grains/Adbhut Anaj, and Nutra-cereals due to the presence of high vitamins, minerals, and protein content. All millets have small seeds. According to the Food Safety an Standard Authority of India (FSSAI) Millets are high in dietary fibers specifically millets contain 7-12 percent protein, 2-5 fat, 65-75 percent carbohydrates, and 15-20 percent dietary fiber. Due to their high density of nutrients including vitamins, minerals, phytochemicals, and dietary fibers. Millets are also excellent grains to eliminate malnutrition and micronutrient deficiency. Additionally, millets do not require high-quality soil to grow and can be grown under hard conditions. Different types of millets grown in Himachal Pradesh are Finger Millet, Foxtail Millets, Proso Millet, Barnyard Millet. India leading the world towards superfood and to create domestic and global demand and to provide nutritional food to the people, GOI had proposed to United Nations for declaring 2023 as the International Year of Millets, which was supported by 72 countries and United Nations General Assembly declared 2023 as the International Year of Millets.

Ministry of Consumer Affairs Food and Public distribution under the Department of Food and Public Distribution GOI has directed to introduce and promote Millets in their Canteens and meetings. Department of Agriculture and Farmers Welfare on the MyGov platform has launched various competitions to raise awareness of the benefits of the Millets. The completion includes designing “comic story contest on Millets”,“Mighty Millets Quiz’’ and “Millets startup innovation challenge”. This Millets Startup innovation challenge was launched on 10th September 2022. It will encourage the young mind to offer technological/ business solutions to the existing problem in the millets ecosystem. The challenge will remain open till January 31, 2023.India’s proposal to the UN for the proportion of the millets. In 2018 the GOI decided to mark the National Year of Millets. In the same year, the government also notified Millets as Nutracereals and included them under the “Poshan Mission Abhiyan’’. It is a proud movement for Indian farmers as India is the largest producer of Millets in the world. Accounting for 20 % of global production and 80% of Asia’s production.

According to FAO, the aim for 2023 is to increase awareness about millets in food security and nutrition. It also aims to encourage investment in research and development. India is the 5th largest exporter of millets. In 2020-2021 India’s millets export was valued at USD- 26.97 million.PM, Narendra Modi highlighted the benefits of millets to both farmers and consumers in “Mann Ki Bat’’. Millets are gluten-free so they can be considered as good food for people having a gluten allergy. Nowadays there is a decrease in the consumption millets due assumption that this is “food for the poor” and people are unaware about the benefits of millets. The Speaker responded to the queries of the students on various aspects of Millets cultivation. The session was ended with a formal vote of thanks. The event was coordinated by all faculties of the Department of Plant Science.