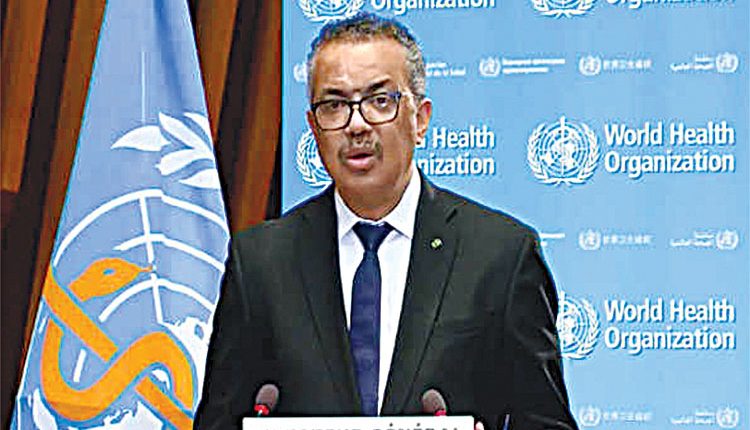 Geneva, Jan 18 (FN Bureau) Quoting late Dr Martin Luther King, the Director General of the World Health Organization (WHO) Dr Tedros Adhanom Ghebreyesus on Monday emphasised on the need to ensure equal vaccine access for all irrespective of socio-economic background. He said “we must act on Dr King’s words: ‘Of all the forms of inequality, injustice in health is the most shocking & the most inhuman…’ Today I warned of ‘another brick in the inequality wall between the Earth globe europe-africa’s haves & have-nots’ without”. He was delivering the opening remarks at the 148th session of the Executive Board of the Global Health body. The Executive Board was chaired by Health Minister Dr Harsh Vardhan.

Pointing out that during the AIDS epidemic it took a decade to ensure that the poor of the world got access to the vaccine, and by the time the vaccine for the H1N1 pandemic was developed the pandemic was over, WHO Chief emphasised that now we have the chance to correct our past failures. “We have an opportunity to beat history; to write a different story; to avoid the mistakes of the HIV and H1N1 pandemics.” Hailing the development of the vaccines as ‘a stunning scientific achievement’, he said the importance of vaccine is further augmented as new variants of the virus are being discovered. He pointed out the prevailing global inequality as regards the vaccine.

“It’s right that all governments want to prioritize vaccinating their own health workers and older people first. But it’s not right that younger, healthier adults in rich countries are vaccinated before health workers and older people in poorer countries.” Dr Tedros felt that the world should work as ‘one global family’ to prioritize vaccinating those that are most at risk of severe diseases and death, in all countries.

‘Health workers, elders to be vaccinated first’
Geneva, Jan 18 (FN Bureau) Terming the development and approval of COVID vaccines less than a year after the emergence of Novel Coronavirus as a ‘stunning scientific achievement’, the World Health Organisation (WHO) on Monday expressed it’s concern over the ‘distribution of the vaccine between the poor and rich counties’. Addressing the 148th Executive Board Meeting, virtually from the WHO Headquarters in Geneva, Director-General Tedros Adhanom Ghebreyesus said, ‘We will have enough vaccine. But at present, we must work together as one global family to prioritise those most at risk of severe diseases and death across the world.’
Mr Ghebreyesus said it was not right that the youth, healthier adults in rich countries were being vaccinated, even before the health staff and old people in poorer countries could receive the vaccine.

‘The recent emergence of rapidly-spreading variants makes the rapid and equitable rollout of vaccines all the more important. But, we now face the real danger that even as vaccines bring hope to some, they become another brick in the wall of inequality between the world’s haves and have-nots,’ he added. According to Mr Ghebreyesus, ‘More than 39 million doses of vaccine have now been administered in at least 49 higher-income countries. Just 25 doses have been given in one lowest-income country. ‘I need to be blunt: the world is on the brink of a catastrophic moral failure – and the price of this failure will be paid with lives and livelihoods in the world’s poorest countries,’ he warned.