US threatens sanctions on Myanmar 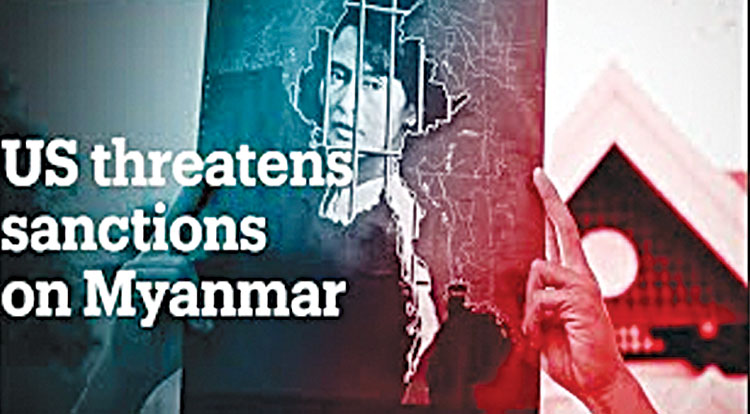 Washington, Feb 2 (Agency) United States on Monday threatened to impose sanctions against the Myanmar following a military coup. “The United States removed sanctions on Burma over the past decade based on progress toward democracy.

The reversal of that progress will necessitate an immediate review of our sanction laws and authorities, followed by appropriate action,” US President Joseph Biden said in a statement. Both State Counselor Aung San Suu Kyi and President Win Myint were detained by the military in an early morning raid after which the military announced a state of emergency in the country for the period of one year. Earlier in the day too, the Washington had threatened to take action against those responsible for the detention of the two leaders. “The United States is alarmed by reports that the Burmese military has taken steps to undermine the country’s democratic transition, including the arrest of State Counselor Aung San Suu Kyi and other civilian officials in Burma [Myanmar].

President [Joe] Biden has been briefed by National Security Advisor Jake Sullivan,” White House Spokesperson Jen Psaki had said. President Biden said that the military’s seizure of power in Burma, the detention of Aung San Suu Kyi and other civilian officials, and the declaration of a national state of emergency are a direct assault on the country’s transition to democracy and the rule of law. “In a democracy, force should never seek to overrule the will of the people or attempt to erase the outcome of a credible election,” Mr Biden said. The US President urged the international community to come together in one voice to press the Burmese military to immediately relinquish the power they have seized, release the activists and officials they have detained, lift all telecommunications restrictions, and refrain from violence against civilians.

Moscow, Feb 2 (Agency) Myanmar’s military, also known as the Tatmadaw, has issued a notice suspending all flights, including those serving domestic locations, after Monday’s alleged coup that saw several prominent officials detained, domestic media outlets reported on Tuesday. The Myanmar Times newspaper said that it had seen a copy of a Myanmar Notice to Airmen that revoked permission for all domestic, international, and relief flights until 23:59 local time [17:29 GMT] on May 31. The Tatmadaw declared a one-year state of emergency on Monday in what international observers have termed a military coup. State Counsellor Aung San Suu Kyi and President Win Myint were among those who were detained during a series of raids. Earlier in the day, Myanmar’s ruling National League for Democracy (NLD), called for the immediate release of all detainees. The NLD emerged victorious in Myanmar’s November 8 election, although the Tatmadaw has claimed that the vote was subject to serious voter fraud. International leaders, including US President Joe Biden, have condemned the alleged coup and have called for the urgent release of all detainees.