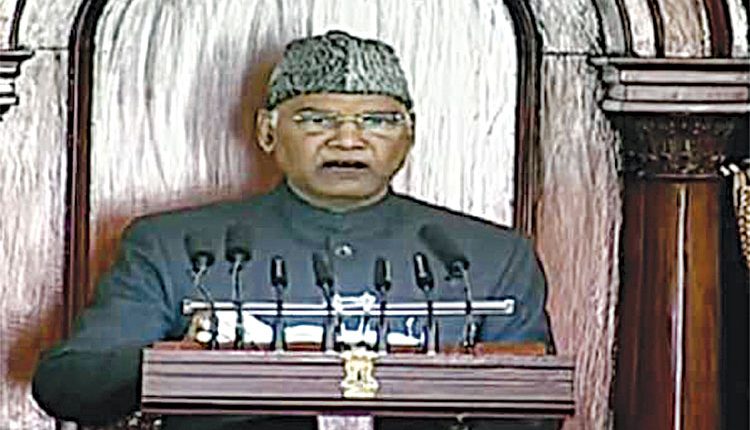 New Delhi, Jan 29 (FN Agency) President Ram Nath Kovind on Friday said three crore families have been connected with piped water supply so far under ‘Jal Jeevan Mission’ scheme. Addressing a joint sitting of both the Houses of Parliament on the opening day of the Budget session, the President said, ‘Baba Saheb Ambedkar was not only the principal architect of the Indian Constitution but also guided the development of the country’s Water Policy. On 8th November 1945, during a conference in Cuttack, he had said – “Water is Wealth. Water being the wealth of the people and its distribution being uncertain, the correct approach is not to complain against nature but to conserve water”.’

‘Drawing inspiration from Baba Saheb, my Government is working on the ambitious scheme of ‘Jal Jeevan Mission’,’ the President said. He said besides delivering water to every household (Har Ghar Jal), work on water conservation is also progressing at a rapid pace. The President said under this scheme, ‘water connection is being provided on priority to brothers and sisters belonging to the Scheduled Castes & Scheduled Tribes as well as other deprived sections of the society’. The President said keeping in mind the requirements of the 21st century and with a view to improving the connectivity of the country’s villages, the Government has made commendable progress in expanding the network of rural roads.

‘Under the Pradhan Mantri Gram Sadak Yojana, construction of 6.42 lakh km of road network has been completed in rural areas of the country. In the third phase of this scheme, 1.25 lakh km roads connecting the settlements, schools, markets and hospitals in rural areas will also be upgraded,’ he said.

The President said along with roads, internet connectivity is equally important in the rural areas. After ensuring electrification of every village, the Government is implementing a mission to connect over 6 lakh villages of the country through optical fibre, he said.

India must continue to focus on Economic Growth to Alleviate Poverty