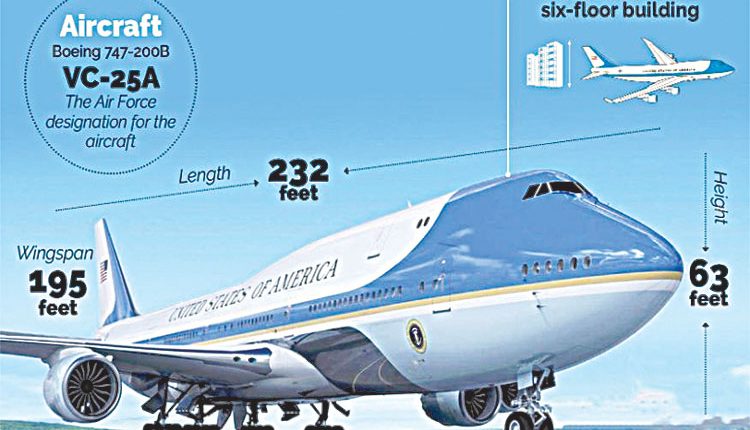 The United States will get its new President when Joe Biden will take oath an an elaborate inauguration day planned today. Biden will soon inherit the safest of the safe transportation modes specially made for the safety of US Presidents. Of all the things, the Air Force One is the most famous in the world and is unarguably the safest mode of transportation for any head of state across the globe. Often called the “Flying Oval Office” or a fortress in the sky, the presidential plane is manufactured by Boeing and is one of the largest commercial airliner. The Air Force One is one of the most recognizable symbols of the presidency, and probably as important as the White House itself, where the Commander-in-Chief resides when on land.

Here are more facts on the Presidential Plane – The Air Force One-
1) The Air Force One refers to one of two highly customized Boeing 747-200B series aircraft.
2) The aircrafts carry the tail codes 28000 and 29000. The Air Force designation for the aircraft is VC-25A.
3) The plane gets a White and Blue livery with the words “United States of America,” the American flag, and the Seal of the President of the United States on the body.
4) Air Force One is based on the Boeing’s most successful and renowned 747 airplane known for its double decker cabin and a large hump.
5) Air Force One is capable of refueling midair, unlike commercial jetliners who carry a fixed fuel and have to land for refueling.
6) Air Force One is called a fortress not because of its body but because of its defense systems. Its onboard electronics are hardened to protect against an electromagnetic pulse.
7) Air Force One gets advanced secure communications equipment which makes the aircraft a mobile command center in the event of an attack on the United States.
8) The cabin is 4,000 square feet of floor space on three levels. The President stays on an extensive suite with a large office and conference room. There’s a dedicated medical suite with an operating room, permanent onboard doctor and containers carrying Blood for President.
9) The plane has two food preparation galleys and can feed 100 people at a time.
10) Air Force One never flies alone and several cargo planes fly ahead of Air Force One to provide the President with services needed in remote locations.
11) The President of the United States travel with senior advisors, Secret Service officers, traveling press, and other guests, all of which have their quarters to stay.
12) Air Force One is maintained and operated by the Presidential Airlift Group, part of the White House Military Office founded in 1944 on direction of President Franklin D. Roosevelt.
13) The Boeing 747-200 was first delivered in 1990 during the administration of President George H. W. Bush.
14) The Air Force One can carry 102 passengers including 26 crew members.
15) President Donald Trump was in talks with Boeing for a new 747-800 series of presidential planes, which will be more advanced and luxurious. Reports suggested he planned to add a red colour to the livery of the plane to highlight the American Flag.