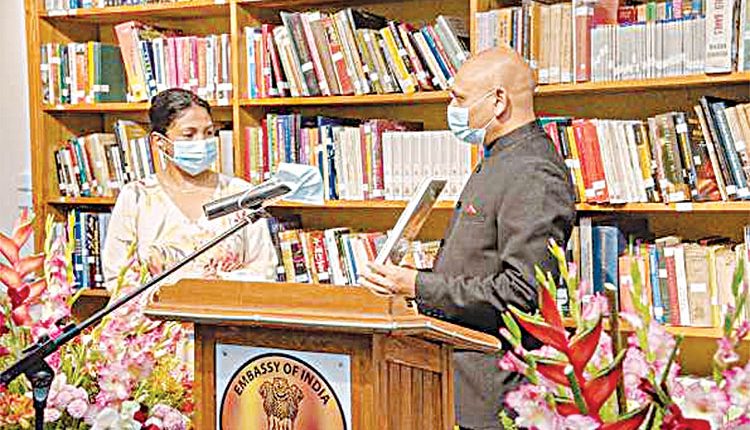 Anatavario, Jan 22 (FN Agency) A street library was inaugurated at Indian embassy in Madagascar. The library was inaugurated by the Minister of Communication and Culture of the Government of the Republic of Madagascar Mrs Andriantogarivo Rakotondrazafy Lalatiana and Ambassador of India to Madagascar, Abhay Kumar. Addressing the audience at the inauguration, the Ambassador of India Abhay Kumar said – ‘‘Cultural exchange is one of the important dimensions of growing and strengthening ties between India and Madagascar. Taking this cultural relationship a step forward, the Embassy of India in Madagascar had today set up a ‘Street Library’ in front of its building in Tsaralalana.’’ he further added. ‘‘Street Library will be an open cultural space accessible from the street, and is an invitation to share the joys of reading with the Malagasy people who have a keen interest in books, he stated. The Street Library will have a large variety of Indian books like biographies, history books, literary fiction and nonfiction books, he further said adding that it would host a significant number of books in French and Malagasy comprising of novels, short stories, poems, etc. “It will be open on week days from 10AM-12:30pm and 2 PM-4:30pm.

We really hope that people will be able to take the benefits from the possibility of expanding their literary and cultural horizons, thanks to the Street Library. ’’, he added. Interested readers may register themselves with the Indian Embassy, get a book from the Street Library and return it to the Embassy after an enjoyable read, free of cost, he informed. Speaking on the occasion the Minister of Communication and Culture of the Government of the Republic of Madagascar Mrs Lalatiana said: ‘‘I would like to congratulate the Embassy of India for the implementation of the idea of a Street Library. This street library perfectly fits with the Ministry of Communication and Culture’s program Ndao hamaky boky ankalamanjana or the setting up of reading spaces in public places.’’, she felt. The Minister of Communication and Culture became the first borrower of books from the Street Library and while registering her name as a borrower, she wrote: “I really appreciate the “Street Library”. What a wonderful idea, thank you so much.

“ Malagasy people, I hope, will enjoy it very much”. she noted and expressed the idea of expanding the street library in parks, cultural spaces across the city of Antananarivo so that maximum people can take advantage of reading. On this occasion the Embassy of India also donated books for the especially curated ‘‘India Corner’’ at the National Library of Madagascar. While handing over the books Ambassador Kumar said-“ This will help in making Indian literature accessible to Malagasy people at large and enhance their knowledge about India’’. Minister Lalatiana, appreciating the gesture of the Indian Embassy, said: ‘‘I would also seize this opportunity to thank the Embassy of India for donating books to the Ministry. These books are intended for the “India Corner” within the National Library of Madagascar. And I’m particularly elated that very soon, India will be present in this “country section” throughout books promoting its culture, economy and history. Our greatest wish is for our cultural relationship to become even stronger over the years.’’, she remarked.