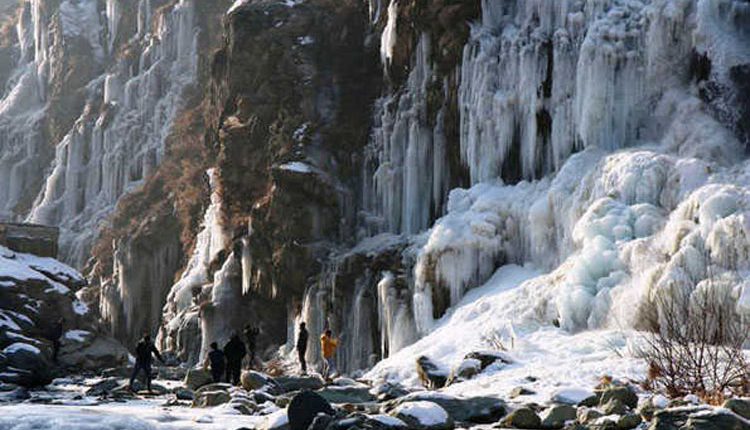 A Met department spokesperson said that the night temperature is expected to dip further due to clear skies during the next six days though weather during the day would improve due to sunshine. The border town of Drass was the coldest place in the region at minus 18.6 degree, followed by Kargil, where the mercury dipped and settled at minus 13.8 degree. The mercury in Srinagar dipped about 2 degrees from Monday and settled at minus 3.2 degree, which is over 2 degree below normal. People in the city woke up to a chilly Tuesday morning. But, as the day progressed bright sunshine greeted people, resulting in some improvement in the temperature, though ice cold winds continued. Drivers and mechanics had burned wood on roadsides in the morning to keep themselves warm. He said weather will remain dry during the next 24 hours in Srinagar, where maximum and minimum temperatures would be around 11 degree and minus 4 degree respectively. After witnessing the coldest night of the season so far at minus 10.2 degree, tourists in Gulmarg woke up to a chilly morning. But, the weather improved in Gulmarg, about 55 km from here in north Kashmir, even as bright sunshine greeted tourists, who were out on ski slopes enjoying different snow activities.

“The influx of tourists has witnessed a considerable improvement due to early snowfall in the ski resort. Despite chilly weather conditions, tourists are enjoying different snow related activities, including skiing and snowboarding. Hopefully the rush of tourists will further increase in coming weeks,” a hotelier told UNI over the phone from Gulmarg. World famous health resort of Pahalgam was the only place in the valley where the night temperature witnessed some improvement though it was still below normal. Against minus 6.7 degree recorded on Monday, the night temperature in Pahalgam was minus 5.3 degree. The night temperature at tourist resort of Kokernag, Qazigund, gateway to the valley, and Kupwara in north Kashmir dipped and settled at minus 4.2 degree, minus 2.6 degree and minus 2.3 degree, respectively.

Afghan Prez speaks with US House of Representatives speaker

AAP to contest UP Assembly elections in 2022: Kejriwal