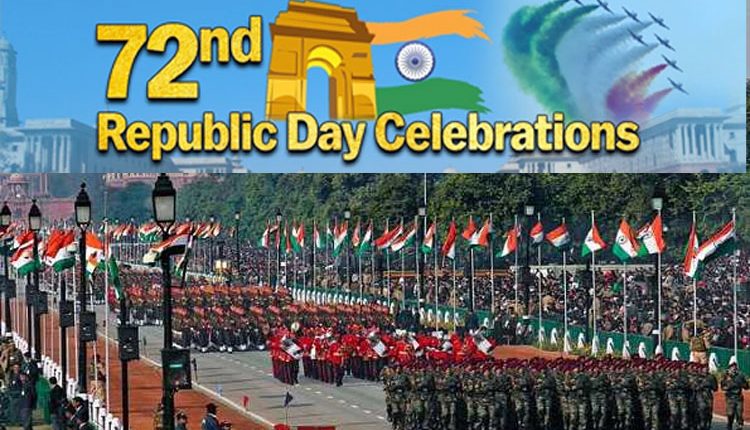 New Delhi, Jan 26 (Agency) As Indian republic turned 72 years old in the midst of a global pandemic, its celebrations at the Rajpath (King’s way) here on Tuesday witnessed many firsts. To honour and celebrate the 50 years of India-Bangladesh diplomatic relations, a special Bangladeshi tri-service contingent led the parade on the tunes of ‘Shono Ekti Mujiborer’ (listen the voice of Mujib, referring to latter’s father of the nation — Sheikh Mujibur Rahman). This year also marks the 50th anniversary of the 1971 India-Pakistan war, which is known as Bangladesh Liberation War or its war of independence. The most popular displays of the annual parade, its colourful tableaus began with the first ever exhibit of Ladakh since the bifurcation of the state of Jammu and Kashmir into two union territories in August 2019, under the theme of ‘Vision to the Future’. It sent a message for a carbon neutral environment with that of peace and spirituality, depicted by a huge Maitreya Buddha bust. Last year, Jammu and Kashmir made its appearance.

The highlight of majority of this year’s state tableau were the heritage temples of cultural significance such as Sun Temple of Gujarat, Shore Temple of Pallava Dynasty (present day Tamil Nadu), Kedarnath of Uttarakhand, Shivalinga in Vijayanagara (Andhra Pradesh). Among them the soon to be built Ram Mandir of Ayodhya, Uttar Pradesh was also included. State of Maharashtra and Punjab were represented by the saints of Bhakti Movement and 400th birth anniversary of ninth guru of Sikhs – Guru Teg Bhadur, respectively.

Door-step delivery of ration will be launched by March: Kejriwal