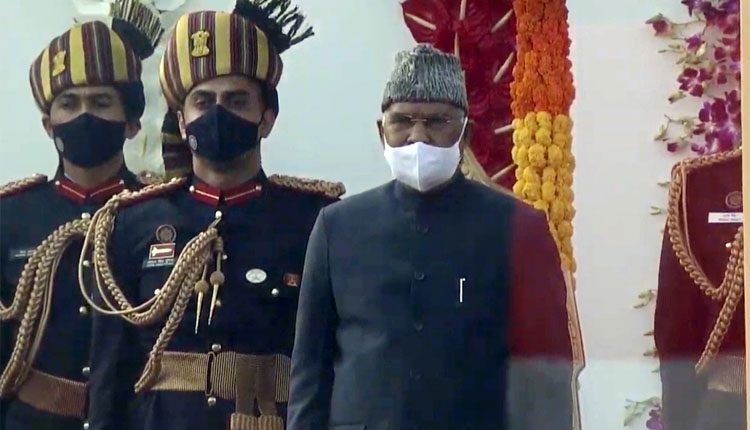 New Delhi, Jan 26 (FN Bureau) India’s military might, cultural diversity, social and economic progress were on display during the 72nd Republic Day celebrations here at the majestic Rajpath on Tuesday, which was largely curtailed due to the novel coronavirus pandemic. The Republic Day Parade ceremony commenced with Prime Minister Narendra Modi visiting the National War Memorial. Mr Modi led the nation in paying solemn tributes to the fallen heroes by laying a wreath. Thereafter, the Prime Minister and other dignitaries headed to the saluting dais at Rajpath to witness the parade. As per tradition, the National Flag was unfurled followed by the National Anthem with a booming 21-gun salute. The parade commenced with President Ram Nath Kovind taking the salute. The parade commenced at 1000 hrs from Vijay Chowk and ended at the National Stadium, covering a distance of 3.3 km, instead of normal 8.2 km, owing to the COVID-19 protocol. Owing to the COVID protocols, the size of marching squads participating in the parade was reduced. This year, only around 25,000 spectators were allowed to witness the parade as compared to the average 1.15 lakh people each year.

Children below the age of 15 years and the elders with co-morbidities were not permitted to witness the parade. The parade was commanded by Parade Commander, Lieutenant General Vijay Kumar Mishra, Ati Vishisth Seva medal, General Officer Commanding Delhi Area. Major General Alok Kacker, Chief of Staff, Delhi Area was the Parade, Second-in-Command. The proud winners of the highest gallantry awards were followed which included the winners of the Param Vir Chakra and the Ashok Chakra. Param Vir Chakra winners Subedar Major Yogendra Singh Yadav, 18 Grenadiers and Subedar Sanjay Kumar, 13 JAK Rifles and Ashok Chakra winner Lieutenant Colonel D Sreeram Kumar followed the Deputy Parade Commander on Jeeps. The Param Vir Chakra is awarded for the most conspicuous act of bravery and self-sacrifice in the face of the enemy. The Ashok Chakra is awarded for similar acts of valour and self-sacrifice but, other than, in the face of the enemy.

The 122-member proud contingent of the Bangladesh Armed Forces comprising of soldiers of the Bangladesh Army, sailors of the Bangladesh Navy and Air Warriors of the Bangladesh Air Force lead the contingent march on the Rajpath. The Bangladesh contingent carried the legacy of legendary Muktijoddhas of Bangladesh, who fought against oppression and mass atrocities and liberated Bangladesh in 1971. The first domestic contingent in the uniform of the erstwhile Gwalior Lancers was 61 Cavalry led by Captain Deepanshu Sheoran. The 61 Cavalry is the only active serving horse cavalry regiment in the world. It was raised on August 1, 1953 with the amalgamation of six state forces’ cavalry units. The Indian Army was represented by a Mounted Column of 61 Cavalry, seven mechanised columns, six marching contingents and fly-past by Rudra and Dhruv Advanced Light Helicopters of the Army Aviation. Indigenously-developed Main Battle Tank of the Indian Army, T-90 Bhishma, Infantry Combat Vehicle (ICV) Ballway Machine Pikate (BMP II)-, Brahmos Weapon System, Pinaka Bridge Laying tanks T-72, Samvijay Electronic Warfare System and Schilka Weapon system were the main attraction in the mechanised columns.