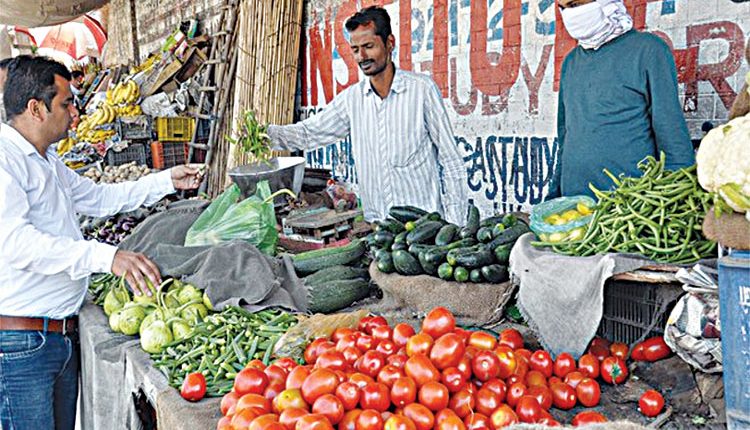 New Delhi, Jan 12 (Mayank Nigam) Declining vegetable prices brought down the retail inflation to a 15-month low of 4.59 per cent in December and within the comfort zone of the Reserve Bank, government data showed on Tuesday. It is for the first time during the current fiscal that the Consumer Price Index (CPI) based inflation print is below 6 per cent or in the RBI’s target range of 2 to 6 per cent. The central bank factors in the CPI-based inflation while arriving at its monetary policy. The inflation in December 2020 came down from 6.93 per cent in November, mainly on account of 10.41 per cent decline in vegetable prices over the year-ago period.

As the global and domestic demand expected to strengthen with the rollout of COVID-19 vaccines, the core-CPI inflation may remain relatively sticky, and display a limited correction going forward. ‘With the CPI inflation expected to continue to exceed the MPC’s 4 per cent target during FY2022, we do not expect any more rate cuts in this cycle, despite the sharp slackening in the headline inflation rate in December 2020. ‘We continue to expect the stance of the Monetary Policy to be changed to neutral from accommodative in the August 2021 Policy review or later, only after there is greater certainty on the durability of the awaited economic revival,’ she said. Suman Chowdhury, Chief Analytical Officer, Acuite Ratings & Research, said the drop in food inflation has indeed surprised on the downside albeit the sustainability of such low food inflation would need to be seen. ‘While the CPI print has nearly come down to the comfort level of the MPC, we believe that the likelihood of further easing is very low and an extended pause on the interest rates can be expected,’ Chowdhury said. Commenting on the data, Sachin Chhabra, Founder, Peel-Works Pvt Ltd said primarily led by a sharp drop in food prices, the retail inflation has subsided substantially in December, which is indeed heartening news. ‘With normalcy returning on the supply side, the retail inflation may fall further in the coming months.

The fall in retail inflation will allow the RBI to continue its accommodative stance, which is critical for a sustained revival of demand,’ he said. The central bank has been asked by the government to keep the retail inflation at 4 per cent (+ or – 2 per cent). The RBI had kept the key interest rate unchanged during its last monetary policy on inflation concerns. Chirag Arora, Founder, Organisch Overseas Pvt Ltd, said the fall in prices of vegetables is primarily the reason for a sharp drop in retail prices in December. ‘Going forward, we expect prices of fruits and vegetables may fall further,’ he added. Rajani Sinha, Chief Economist & National Director – Research, Knight Frank India said the critical aspect is that other components of inflation, including core inflation, has remained sticky at around 5.2 per cent. ‘While the fall in overall inflation at this juncture is a welcome relief, RBI will be closely watching core inflation as demand revives in the economy,’ she said. Rahul Gupta, Head of Research- Currency, Emkay Global Financial Services said it’s after April 2020, inflation has come in between the RBI’s medium target range of 2-6 per cent. However, with the increase in crude oil prices and fears over bird flu, inflation may remain sticky for some time. ‘This may give RBI some room to cut interest rates, but in our view, the central bank may continue its pause at the February’s policy and look out for more incoming data,’ Gupta said.

Sunil Kumar Sinha, Principal Economist, India Ratings & Research, said apart from deflation in vegetables, a decline in inflation of meat and fish, eggs and pulses and products also helped the consumer food price index to decline to a 16-months low of 3.4 per cent. ‘In view of growth concerns, Ind-Ra expects RBI to continue its accommodative policy stance and maintain status quo on policy rate in the forthcoming monetary policy review while keeping a close eye on the forthcoming Union budget to ascertain governments fiscal stance,’ Sinha added. A recent RBI paper had advocated that maintaining 4 per cent inflation is appropriate for India, as targeting a lower rate could impart deflationary bias to the monetary policy. The six-member panel, which had its first meeting on October 2016, was given the mandate to maintain annual inflation at 4 per cent until March 31, 2021, with an upper tolerance of 6 per cent and a lower tolerance of 2 per cent. The inflation target is likely to be reviewed by March-end 2021.