Power is not to rule but to serve humanity: Farooq 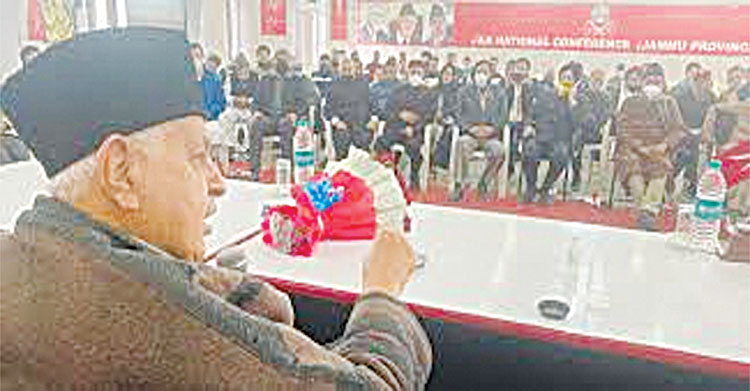 Jammu, Jan 20 (FN Agency) Asserting that people were the real fountain of power, National Conference President Dr Farooq Abdullah on Tuesday said that power is not to rule but to serve humanity. “Serving humanity is the core of our political philosophy and National Conference has all along cherished the great values of the pluralistic ethos that has actually been a binding force between the regions and religions,” Dr Abdullah said while addressing the party cadre in the wake of District Development Councils here at Sher-e-Kashmir Bhavan. He said that the spirit has not only to be sustained but promoted in a big way to keep at bay the divisive forces.

Dr Abdullah also exhorted the cadre across Jammu and Kashmir to remain steadfast in their resolve of serving the people and strengthening bonds of inclusiveness—the political philosophy that has withstood the test of times. “All eyes are watching how National Conference has emerged as a big political force in Jammu and Kashmir in its own right”, Dr Abdullah said in reference to the recently held elections to grass roots level democratic institutions, The meeting reviewed the functioning of the party at district and block levels, especially in the wake of its performance in the recent elections. Besides Provincial President Mr Devender Singh Rana, senior party leaders were present on the occasion. Dr Abdullah said that massive support despite numerous challenges is reflective of the deep faith of the people in the National Conference, which has met the challenges with courage and fortitude. He added that the strength of the party emanates from the people at ground zero and there is a need to channelize this support for the betterment of the people, irrespective of caste, creed, region or religion.

The NC President said a big mass outreach will be undertaken across Jammu and Kashmir to galvanise the party at the grassroots level. “The politically empowered people hold key to change and given their sagacity and sense of understanding the day is not far when they will become the masters of their own destiny,” he said. Dr Abdullah complimented the people in general and the party cadre in particular for their commitment to the secular ethos and hoped that this glorious tradition will continue to inspire the generations, he said adding, “unity in diversity is the real strength of Jammu and Kashmir and “this is what has seen us overcome all the challenges”. He called for strengthening the cadre at all the levels.”

Germany warns of border closures amid fear of COVID-19 mutations