PM calls for decisive action by G-20 against COVID-19 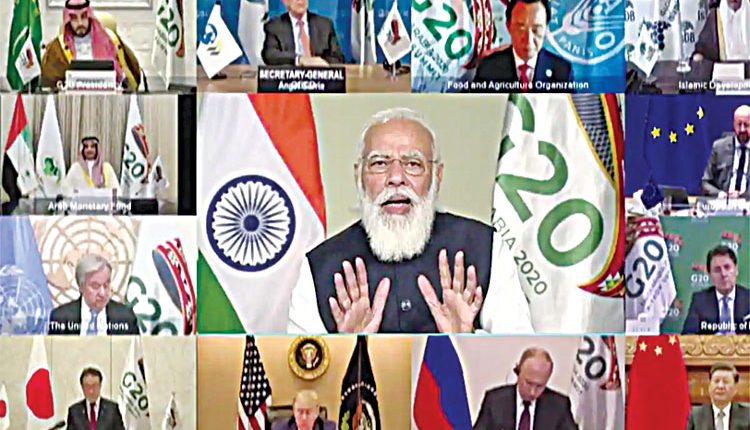 New Delhi, Nov 22 (Bureau) Prime Minister Narendra Modi has called for decisive action by G-20 against COVID-19 not limited to economic recovery, jobs or trade but on preserving planet earth, and has described the pandemic as the biggest challenge world is facing after World War-II. In his address to the 15th G-20 Summit hosted by Saudi Arabia, the Prime Minister also called for a new Global Index for the post-Corona world that comprises four key elements including creation of a vast Talent Pool, ensuring that technology reaches all segments of society, transparency in systems of governance and dealing with mother earth with a spirit of trusteeship. Based on this, the G-20 can lay the foundation of a new world, he said.

Heads of State/Government of 19 member countries, the EU, other invited countries and international organizations are attending the two-day Summit being conducted in virtual format in view of the COVID-19 pandemic. Those who are attending the Summit include, besides Prime Minister Modi, US President Donald Trump, Russian President Vladimir Putin and Chinese President Xi-Jinping.
The Summit under Saudi Presidency centered on the theme “Realizing Opportunities of 21st Century for All”, has assumed greater importance in the wake of the ongoing COVID-19 pandemic. The Summit is focused on overcoming the pandemic, economic recovery and restoring jobs and building an inclusive, sustainable and resilient future. There are also side events planned on pandemic preparedness and on safeguarding the planet. Describing the COVID-19 pandemic as an important ‘turning point in history of humanity and the biggest challenge the world is facing since the World War II,’ Prime Minister Modi stressed the importance of ‘decisive action by G-20, not limited to economic recovery, jobs and trade but focusing on preserving Planet Earth’. All are trustees of humanity’s future. Dealing with environment and nature as trustees rather than owners would inspire towards an holistic and a healthy life style, a principle whose benchmark could be a Per Capita Carbon Footprint, he said.

The Prime Minister underscored that in the past few decades while there had been emphasis on Capital and Finance, time had come to focus on multi-skilling and re-skilling to create a vast human talent pool. This would not only enhance dignity of citizens but would make our citizens more resilient to face crises. Any assessment of new technology should be based on its impact on Ease of Living and Quality of Life. The Prime Minister stressed on greater transparency in governance systems which would inspire citizens to deal with shared challenges and enhance their confidence. Noting that ‘Work from Anywhere’ is a new normal in the post-COVID world, the Prime Minister suggested creation of a G-20 Virtual Secretariat as a follow up and documentation repository. The Summit will culminate in the adoption of the Leaders’ Declaration and with Saudi Arabia passing on the Presidency to Italy.

‘UP is most preferred investment destination in country’