People in Bangladesh are living in a terrible situation: BNP 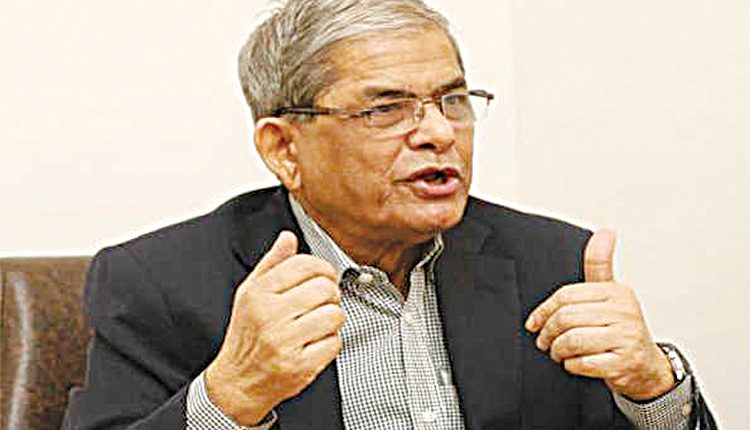 Dhaka, Dec 2 (Agency) Bangladesh Nationalist Party (BNP) secretary general Mirza Fakhrul Islam Alamgir has called for bringing Bangladesh out of bad times. He said that Begum Khaleda Zia is now unjustly imprisoned. ‘As man as 35 lakh of our people have been accused in false cases. Hundreds of our workers, our brothers, our allies have been killed, they have been disappeared. Many families today are living in extreme poverty. Not only the BNP, the people of Bangladesh are living in a terrible situation, in difficult times. We have to get out of here’, he said.

The BNP secretary general made the remarks while addressing a virtual discussion special guest on Tuesday night to highlight the undemocratic situation in the country. Prof Dr Farhad Halim, Executive Director, ZRF, highlighted the activities of the Foundation at different times. This virtual science fair was organized by the Ziaur Rahman Foundation (ZRF) in the grand finale of Group C. This virtual science fair titled ‘In Search of the Future Scientist’ started more than two months ago. The closing ceremony of ‘C’ Group was held on Tuesday (December 1) evening through the online platform Zoom. Acting Chairman of ZRF Prof. Dr. Farhad Halim Donar and Member Secretary of Science Fair Mostafa Aziz Sumon presided over the function. Md. Iqbal, Dr. Syeda Tajnin Waris etc. BNP chairperson’s adviser also participated. Dr. Jobaida Rahman said that there is no alternative to science and research to take today’s dark world to the path of light. He thanked the contestants, winners and all concerned of ZRF Science Fair. The BNP secretary general said that we have to move forward through science, politics and democratic practices. Bangladesh must be liberated. We have to create the dream country of Shaheed Ziaur Rahman, the dream country of our leader (Tareq Rahman), the Bangladesh of the spirit of independence of 1971.

“I’m extremely optimistic,” he said. We can I believe we can do it. We are too old-we will not live on this earth for a while. But the number of you who have come up with the project today is not small. I hope you think deeply about what a wonderful state you are at this young age. These are our sons, these are our future. They will give us the gift of a beautiful state. What ZRF has done is unimaginable. I hope ZRF will show the way to the nation. The BNP secretary general said, “Today, many people see darkness and despair all around.” I don’t believe in that. I believe we can reach the path of light from this darkness. I believe that the great work done by the Ziaur Rahman Foundation, the great work that has been done – they will show the way to the country and the nation. Calling on the youth to be politically conscious, Mirza Fakhrul said, “If there is no democratic system in the country, then no matter what we say, sustainable development or sustainable development through appropriate technology will never be possible.” From what I think, the big problem in Bangladesh today is the political awareness among the youth, the youth, that it needs to be further increased. I think it’s more of a campaign.