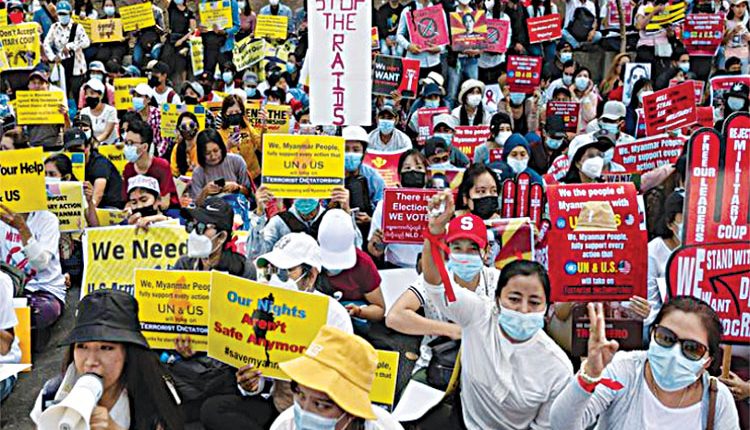 Yangon, Feb 16 (Agency) Myanmar’s military junta guaranteed on Tuesday that it would hold an election and hand over power, denied its ouster of an elected government was a coup or that its leaders were detained, and accused protesters of violence and intimidation. The junta’s justification of its Feb. 1 seizure of power and arrest of government leader Aung San Suu Kyi and others came as protesters again took to the streets and after a U.N. envoy warned the army of “severe consequences” for any harsh response to the demonstrations.

“Our objective is to hold an election and hand power to the winning party,” Brigadier General Zaw Min Tun, spokesman for the ruling council, told the junta’s first news conference since overthrowing Suu Kyi’s government. The military has not given a date for a new election but it has imposed a state of emergency for one year. Zaw Min Tun said the military would not hold power for long. “We guarantee … that the election will be held,” he told the nearly two-hour news conference, which the military broadcast from the capital, Naypyitaw, live over Facebook, a platform it has banned. Asked about the detention of Nobel prize winner Suu Kyi and the president, Zaw Min Tun dismissed the suggestion they were in detention, saying they were in their homes for their security while the law took its course. He also said Myanmar’s foreign policy would not change, it remained open for business and deals would be upheld. The military will be hoping its reassurances will dampen the campaign of daily opposition to its rule and to the ousting Suu Kyi and her government. As well as the demonstrations in towns and cities across the ethnically diverse country, a civil disobedience movement has brought strikes that are crippling many functions of government. The unrest has revived memories of bloody outbreaks of opposition to almost half a century of direct army rule that ended in 2011 when the military began a process of withdrawing from civilian politics. But violence has been limited this time though police have opened fire several times, mostly with rubber bullets, to disperse protesters.

A woman who was shot in the head in Naypyitaw last week is not expected to survive. Zaw Min Tun said a policeman had died of injuries sustained during a protest. He said the protests were starting violence while the campaign of civil disobedience amounted to the illegal intimidation of civil servants, and warned that the military’s repsonse would be within the law. “We will wait patiently. After that, we will take action according to the law,” Zaw Min Tun said. The army has given itself extensive search and detention powers and has published penal code amendments aimed at stifling dissent with tough prison terms. U.N. Special Envoy Christine Schraner Burgener spoke on Monday to the deputy head of the junta in what has become a rare channel of communication between the army and the outside world, urging restraint and the restoration of communications. “Ms Schraner Burgener has reinforced that the right of peaceful assembly must fully be respected and that demonstrators are not subjected to reprisals,” U.N. spokesman Farhan Haq said at the United Nations. “She has conveyed to the Myanmar military that the world is watching closely, and any form of heavy-handed response is likely to have severe consequences.”