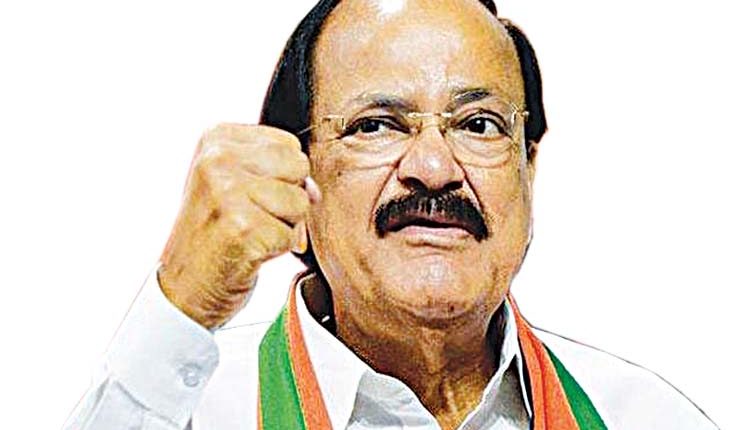 New Delhi, Feb 21 (FN Bureau) The Vice President, Shri M Venkaiah Naidu today called for making mother tongue the primary medium of instruction, at least until Grade 5. He suggested that educating a child in a language that is not spoken at home can be a big impediment to learning especially at the primary stage. Referring to multiple studies, Shri Naidu said that teaching through the mother tongue in the initial stages of education can boost a child’s self-esteem and enhance his or her creativity. Calling the New Education Policy a visionary and progressive document, he urged for implementing the Policy in letter and spirit. Speaking at the inaugural session of the webinar organised by the Ministry of Education and Ministry of Culture, the Vice President focused on five key sectors to promote the use of mother tongue. Apart from emphasizing the use of mother tongue in primary education, the other highlighted areas are the use of local languages in administration, court proceedings and to deliver judgments in them. He also wanted gradual increase in the use of indigenous languages in higher and technical education.

The final emphasis was on everyone to proudly and preferably use their mother tongue in their homes. Shri Venkaiah Naidu said that with hundreds of languages coexisting, linguistic diversity is one of the cornerstones of our ancient civilization. Observing how our mother tongues can evoke an emotional response in the people, Shri Naidu called them an ‘important link to our socio-cultural identity’, ‘a repository of our collective knowledge and wisdom’ and thus needs to be protected, preserved and promoted. Highlighting the importance of mother tongue in governance, Shri Naidu advised that we increase their use, especially at state and local levels. Advocating an inclusive model of governance, he said, “Only by communicating with the common person in a language he or she understands can we include him or her in the process of governance and development. Language of administration should be the language of the people.” Suggesting that language-inclusion should come at the higher levels too, Shri Naidu gave the instance of Rajya Sabha, where a provision has been made for its members to express themselves in any of the 22 scheduled languages.

Addressing a gathering at a programme organised by Swarna Bharat Trust at Muchhinthal in Hyderabad earlier in the day on the occasion of International Mother Language Day, the Vice President underscored the importance of using indigenous languages in higher education too. He highlighted the necessity of having local languages in the judiciary and courts in order to be accessible to the common man. In the webinar, Shri Naidu also expressed concern at the state of endangered languages that are at the risk of permanently getting lost. Attributing it globalisation and homogenization, he reiterated the United Nations’ warning that every two weeks a language disappears taking with it an entire cultural and intellectual heritage. He underlined that with 196 languages, India has the highest number of endangered languages in the world. Shri Naidu appreciated the Scheme for Protection and Preservation of Endangered Languages (SPPEL) of the Ministry of Education, in this regard. Speaking about the importance of multilingualism, the Vice President advised that we learn as many languages as possible, along with a strong foundation in one’s mother tongue.

He called for parents and educators to encourage children to learn a national and an international language, apart from their mother language. Shri Naidu said that such linguistic skills can lead to better cognitive development in children, as multiple studies show. In addition, the Vice President noted that exposure to other languages can also help build cultural bridges and open windows to new worlds of experience. With a healthy respect and interest in each other’s languages, we can foster national unity and unveil an “Ek Bharat Shrestha Bharat”, Shri Naidu observed. On this occasion, Shri Naidu appreciated various government initiatives for a multilingual society such as the National Translation Mission, the Bharatavani project and the proposed setting up of a Bharatiya Bhasha Vishwavidyalaya (BBV) and Indian Institute of Translation and Interpretation (IITT). In conclusion, the Vice President reiterated that languages are nourished only by constant use and that every day must be a Matribhasha Diwas. He called for all-round commitment and efforts to reclaim mother tongues and to ‘feel proud to speak freely and confidently in one’s mother tongue’ in homes, community, meetings and administration. On this occasion, Shri Naidu also inaugurated the International Virtual Calligraphy Exhibition. Dr. Ramesh Pokhriyal, Hon’ble Education Minister, Shri Prahlad Singh Patel, Hon’ble Minister for Culture and Shri Sanjay Dhotre, Hon’ble Minister of State for Education, Dr. Sachidanand Joshi, Member Secretary, IGNCA were among the dignitaries present during the virtual event.

Village industries to be developed into five lakh crore industry