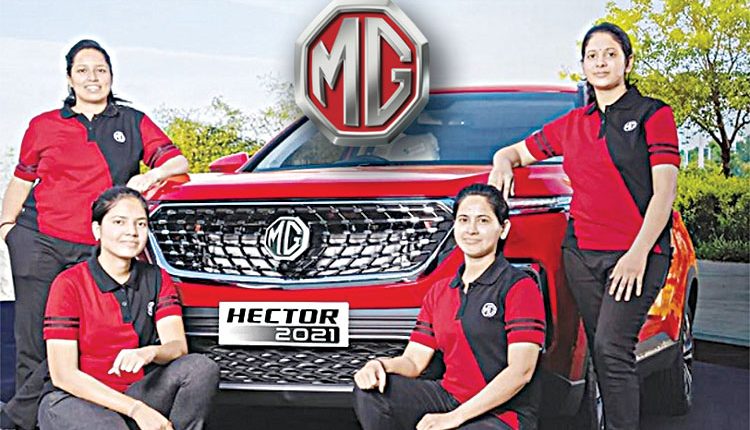 In line with its commitment to both community and diversity, MG Motor India, in collaboration with Women Who Win, has launched a creative mentorship program WOMENTORSHIP’. MG has selected five social women entrepreneurs who have previously embarked upon creating prosperity for the underserved section of society, to uplift more women. MG Motor India will provide the platform for these women entrepreneurs to scale their social ventures to fresh heights and empower and create jobs for more women in society. The 5 social women entrepreneurs include Smita Dugar, Bharti Trivedi, Jabeen Jambughodawala, Phoolbasan Bai Yadav, and Rupali Saini.

During the launch of the program, Indian actress and social activist, Nandita Das, was the Guest of Honor. Smita Dugar, who has been working with women since 2001, passed on her design and craft knowledge to the marginalised segment. Today, Smita has expanded her reach from one village to 30 villages and 1,500 artisans. Bharti Trivedi is leading a movement called ‘KAVACH’. A teacher by profession, Bharti was stirred by seeing the level of hygiene amongst girl children and their sexual awareness in remote regions. She has so far distributed menstrual hygiene kits to 20,000 girls across the country as a part of the initiative. Jabeen Jambughodawala works closely with the tribal women of East Gujarat. She provides training and a means of livelihood to the stay-at-home-women population. She has trained and empowered 1,500 artisans with her work. Jabeen further organises Artisan Pehchan Patra so that they live with honor. Phoolbasan Bai Yadav started a movement with 18 women in dairy products in a remote area of Chhattisgarh.

Now, she is leading the community to empower women through Jhimikhan farming and Aggarbatti making. Rupali Saini is a young entrepreneur who left her job to help the women of Panchkula and keep a dying art of crochet alive. Using the technique, when the child outgrows a toy, one can reclaim yarn from a toy and reuse it in any craft that involves yarn thus resulting in zero wastage. Rupali trains and provides raw material to women. She can also provide training with sign language. Speaking on the initiative, Mr. Rajeev Chaba, President & Managing Director, MG Motor India, said, “As a progressive, cause-driven brand, MG has always driven efforts to empower more women in society. The WOMENTORSHIP program is a testimony to our commitment to enable job creation which could impact thousands of people. It is an attempt to perhaps get one step closer to create an ecosystem in which women train, support, and uplift each other. Congratulating the women entrepreneurs, Nandita Das, Indian Actress and Director, said, “I am glad to again be part of a MG initiative that recognises the contribution of women entrepreneurs.

It takes a lot for a woman to overcome challenges and against all odds stand up for the vision and mission she believes in. If we limit women, we are simply limiting half of the global population. It is heartening to be a part of MG once again in an initiative wherein I can clearly see the impact as well as how far the foundation that we’re today laying goes. For WOMENTORSHIP MG has partnered with “Women Who Win- a group that believes in the power of sisterhood to empower women entrepreneurs, start-ups, professionals, and homemakers. Women Who Win spokesperson Simmi Bhasin said, “Women don’t need reasons for why they can’t’. They just need guidance for how they can’. We believe that our partnership with MG for WOMENTORSHIP goes a long way in catalysing changes taking place on the ground today that will build a better future. Recently, MG manufactured its 50,000th Hector with an all-women crew in its Halol manufacturing facility situated in Vadodara, Gujarat. The development created a new global yardstick in the automotive segment, where women-only teams led everything from panel-pressing of sheet metal and welding to painting jobs and post-production test runs. MG Motor India has high women workforce ratio with 33% of its employees being women.

Airbags for new Cars MandatoryKnow Everything About The Safety Measure