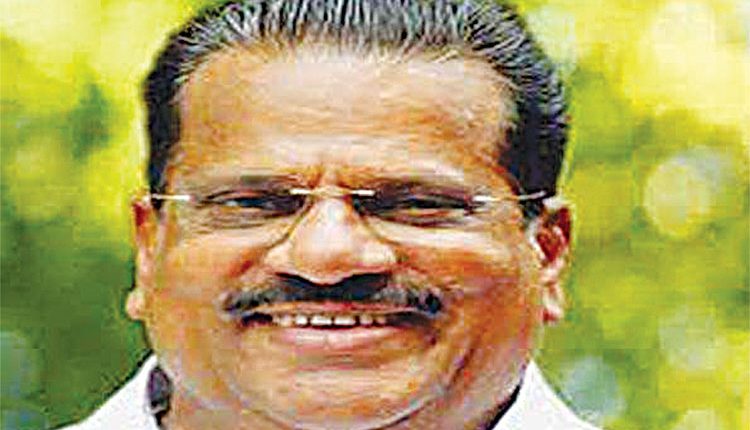 Thiruvananthapuram, Feb 14 (FN Representative) Undeterred by the COVID pandemic, Kerala has secured ‘dream progress’ in its industrial sector and proactively plans to formulate a comprehensive development policy with focus on agriculture, IT and tourism sectors besides industry, state Industries Minister EP Jayarajan said here on Sunday. Starting with the ambitious objective to propel Kerala among the top five industrial states in the country, its industrial sector has not only surpassed the targets but also achieved incredible growth under the current LDF dispensation, he pointed out. “Kerala is now a totally investment-friendly state. In the Niti Aayog’s India Innovation Index, it tops the states in investment-friendliness,” the minister noted.

The Central Government’s Department of Promotion of Industry and Internal Trade had directed all the states to implement ‘Ease of Doing Business’ norms before December 31, 2020. “Kerala was able to comply with it by December 16 itself, which facilitated it to avail a loan of 25 percent of its GDP that came to about Rs 2,370 crores,” Jayarajan said. Listing the achievements in the industry sector, he said Kerala has initiated the Cluster Development Programme which aims to give a fillip to the growth of micro and small-scale industries. The scheme will promote special industries that are set up in specific areas in the state. The common facility centres at the 15 clusters have been approved while 12 of these are already functional. The remaining three are at various stages of completion. The government has also decided to allow Private Industrial Parks. Those ready to find 15 acres of land in the cities or 25 acres in the rural areas can start such parks. KINFRA (Kerala Industrial Infrastructure Development Corporation) is the deciding authority on this. The government will spend up to Rs 5 crores to provide basic facilities such as power and water.

These parks will also get the concessions available to government-sponsored parks. “Despite the continuance of the COVID crisis, the public sector has garnered the strength to look beyond it and move forward. One such instance is of The Kerala State Drugs and Pharmaceuticals, which has been able to produce medicines and hand sanitisers to combat the pandemic,” he pointed out. Work on the plant to produce injections and produce cancer drugs is underway, the minister said. Through modernisation and diversification, the government is opening the way for the revival of the public sector, the minister said. As many as eight textile units have turned the corner. Keltron, Metal Industries Limited, Clays and Ceramics Limited, Autokast Limited, Travancore Cements Limited, Kerala Minerals and Metals Limited, Malabar Cements Limited and The Travancore Cochin Chemicals Limited are all in the process of revival, he pointed out. The government will soon open the grey cement production unit and the electric concrete post unit at the Travancore Cements Limited (TCL) in Kottayam.

Women entrepreneurs will be roped in to start wall putty units in collaboration with TCL. During the first phase of the ‘100 days programme’ announced recently by the Chief Minister, the LDF government had set the target of generating 24,000 jobs. This target was surpassed as the total number of jobs created during this period stood at 28,946. In the second phase, the target is to generate 20,000 jobs. Till February 9, 17,580 jobs were created. In government and public sector firms, 841 jobs were given in the first phase and 147 in the second phase. The biggest jump in job creation happened in the MSME sector mainly because industries in this sector do not require any prior approvals for investment of up to Rs 100 crores. Some 8,660 industries have so far registered under the scheme. In the last four and a half years, this sector has seen an investment of Rs 6,082 crores, 2.29 lakh employment and formation of 64,879 units. As many as 14 Industrial Parks are getting ready at various places in the state under KINFRA and KSIDC (Kerala State Industrial Development Corporation Ltd). A Mega Food Park and the second phase of the Light Engineering Park have started operation in Palakkad. Work on the Defence Park and the Cherthala Food Park has been completed. Also, foundation stones have been laid for Kochi’s Petrochemical Park and Thodupuzha’s Spices Park. Work is progressing on the Life Science Park and the Kelpam Rice Park. The foundation stone will be laid for Kuttanad’s Rice Park. Jayarajan said the industrial sector is poised for great leap forward once the Kochi-Bengaluru Corridor comes into being. For that, 1,878 acres of land is being acquired in Palakkad and 500 acres in Ernakulam. KINFRA is in charge of it. As part of the project, the Kochi Global Industrial Finance and Trade City (GIFT City) will be built. For this KIIFB (Kerala Infrastructure Investment Fund Board) has earmarked Rs 346 crores for land acquisition at Kannambra.

No registration required for setting up business unit in J&K: UT Govt