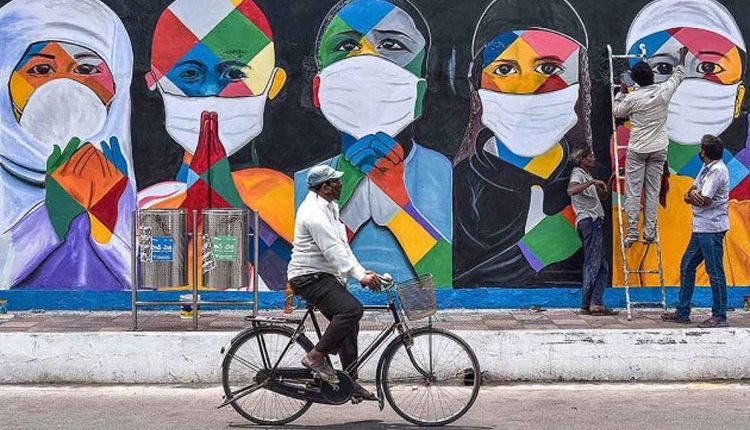 New Delhi, Dec 6 (Bureau) With 264 people succumbing in India to the global pandemic novel coronavirus during the past 24 hours, the country on Wednesday surpassed the grim milestone of 1.5 lakh deaths.
With fresh fatalities, the death toll has now mounted to 1,50,114. In the same period as many as 18,088 people were infected by the virus, taking the overall tally till now to 1.03 crores. However, the government maintained that there is a steady decline in the number of daily COVID-19 deaths as it is less than 300 fatalities being recorded from the last 12 days. Pertinent to mention here that in the last 7 days only one new death per million population was reported in India.

The active cases continued to show a downward trajectory with its share shrinking below 2.2 per cent. There are still 2,27,546 active cases in the country, while 99.97 lakh people have been successfully treated and discharged from the hospitals. New recoveries outnumbering the daily new cases has also improved the recovery rate to 96.36 per cent.
According to the Indian Council of Medical Research (ICMR), as many as 9,31,408 samples were tested on Tuesday, taking the total cumulative samples tested since the beginning of the pandemic till Wednesday to 17.74 crores.

Meanwhile, even though the government has scaled its preparations to vaccinate a massive population, the threat of new COVID strain looms large as 13 more people have been infected by it. The total number of such cases in the country have now risen to 71. The new variant of SARS-CoV-2 was found in the UK, which according to experts, was said to be up to 70 per cent more transmissible. Several countries, including India, have suspended flights with the UK and launched screening of the UK returnees, to prevent the spread of the new mutant.

China yet to finalise permissions for WHO expert team: Dr Tedros

Sourav’s discharge postponed for a day