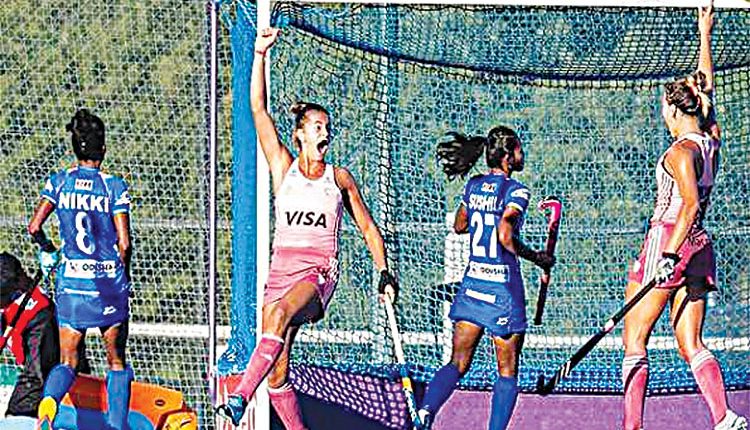 Buenos Aires, Jan 25 (FN Agency) The Indian women’s hockey team lost 2-3 to the Argentina ‘B’ side in a thrilling encounter here. For Argentina ‘B’, goals were scored by Sol Pagela (25’), Constanza Cerundolo (38’) and Agustina Gorzelany (39’) while Salima Tete (6’) and Gurjit Kaur (42’) scored for India on Sunday. In the first quarter, it was India who got off to a flying start winning a Penalty Corner in the first minute. An intentional foul by Argentina while defending the PC led to the visiting side being awarded a penalty stroke. Unfortunately for India, the goal was saved.

Without letting this missed opportunity slow their rhythm, the tourists struck in the 6th minute through the in-form Salima Tete to take the lead. ‘We had a very good start to the match and though we couldn’t score off the penalty stroke, we were able to convert after a good interception in the 6th minute. In the first quarter, we were in control and kept a check on Argentina but the second quarter, they upped their game,’ said chief coach Sjoerd Marijne. A slump in India’s defence in the second quarter was well-capitalised by the experienced home team. Pagela’s 25th minute goal equalized the score line to 1-1. But the game tilted in their favour when India gave away two goals in the 38th and 39th minute. ‘I believe these two goals could have been stopped. We had restricted their circle entries to just 5 in this quarter but allowed them to convert twice in those five attempts,’ Marijne said. ‘Though Gurjit scored in the following minutes to reduce the lead by one goal, we missed some good scoring opportunities thereafter. I feel we were a bit too rushed in our pursuit to convert. We must do much better to win from Argentina in the next following matches,’ he added.

Playing the Argentina Tour after covid-19 restrictions kept the Indian team out of competition for a year and the Indian team has tested their core group in the past four matches where they secured two draws (2-2,1-1) and suffered two narrow loss (1-2 and 2-3). In their upcoming matches this week, the Rani-led side, will face the formidable world no 2 Argentina squad. “In the third and fourth matches, Argentina played with an experienced side that had recently won against Australia ‘A’ and this was a perfect platform for our players to adapt to their level. In these four matches, all the players in the Indian core group got a chance to show their best. In the upcoming four matches we will field our best side to see what we can create against the World No.2 team. There have been good learnings from these four matches, and I want to see how our main team performs against them,” the coach said.