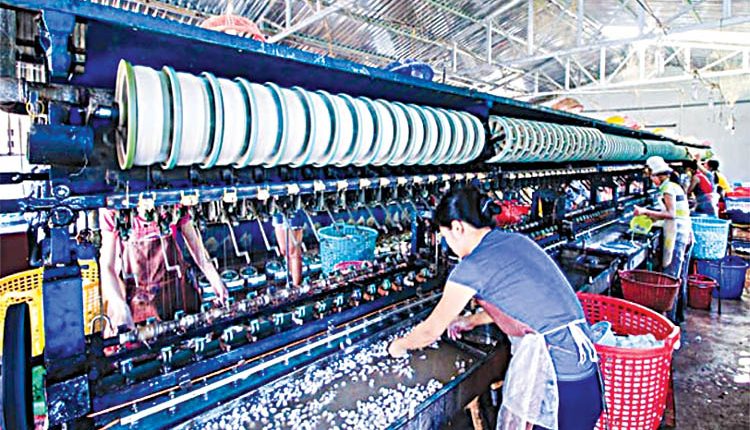 New Delhi, Feb 23 (Mayank Nigam) The government is looking to ensure that India become self-reliant in the silk sector in the next two years, Union Minister Smriti Irani said on Tuesday. The Minister of Textiles and Women & Child Development said that the recent Budget has brought cheer to the textile industry with the announcement of seven mega textile parks.

Addressing the inaugural session of the Karnataka Vastra Tek – Apparel & Textile Conclave organised by the Department of Handloom and Textiles, Government of Karnataka in association with FICCI Karnataka State Council, Irani elaborated on the growth of the silk sector in the state. She also said that Karnataka reigns in the realm of silk. ‘Under the Silk Samagra Program, the Government of India dedicated specifically over Rs 2,000 crore for the development of silk. I am hopeful that the industry gives the state of Karnataka ideas, proposals or initiatives that can make our country Aatmanirbhar in silk. We in the Ministry of Textiles are looking at the next two years to ensure that India is self-reliant in the space of silk,’ she said.

On the future of textiles in the state of Karnataka, the minister said that the Minimum Support Price operations for cotton procurement by the Cotton Corporation of India has touched over Rs 359 crore in the state. ‘From 2014-15 to this year, the Ministry of Textiles has extended support of over Ra 1,622 crore only for cotton procurement and MSP operations benefiting over 1.67 lakh farmers,’ she said. Highlighting the importance of the handicraft sector, the minister said that ‘Pehchaan Cards’ or identity cards were distributed to over 26,000 artisans. The latest handloom census has brought to light that there are over 50,000 weavers in Karnataka who are looking at new opportunities digitally to expand their markets.

She further suggested that on lines of the GeM portal that has brought on board over 1,50,000 weavers from across the country, a similar digital opportunity is given to the marketing of artisans and weavers of Karnataka. The textiles and the apparel sectors were tested as an industry during the COVID times and ‘we rose to that challenge nationally and internationally by becoming the second largest manufacturers of PPE suits,’ Irani said. ‘The fact that we could turn around our manufacturing processes in less than 60 days to meet the immediate need of our country speaks volume and is a testimony to the talent of the textile industry,’ she added.