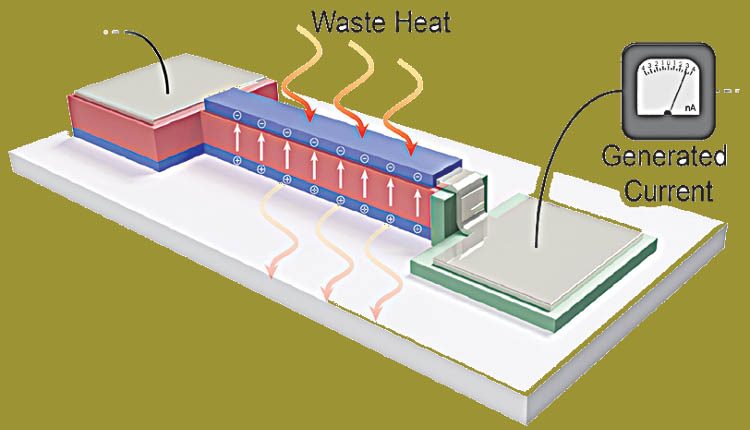 New Delhi, Feb 23 (FN Bureau) Scientists have found a new Lead (Pb) free material which can efficiently convert waste heat to power our small home equipment and automobiles. Thermoelectric energy conversion allows generation of electrical voltage when one end of a material is heated while keeping the other side cold. Finding an efficient material to realize this scientific principle has been a daunting task for scientists. It entails fitting in three seemingly different properties into a single material– high electrical conductivity of metals, high thermoelectric sensitivity of semiconductors, and low thermal conductivity of glasses.

Most efficient thermoelectric materials developed by scientists so far use Lead (Pb) as a major constituent element, restricting their use for mass-market applications. Scientists from Jawaharlal Nehru Centre for Advanced Scientific Research (JNCASR), Bengaluru, an autonomous institution of the Department of Science & Technology (DST), Government of India led by Prof. Kanishka Biswas have now identified a lead-free material called Cadmium (Cd) doped Silver Antimony Telluride (AgSbTe2) which can efficiently allow recovery of electricity from ‘waste heat’ marking a paradigm shift in the thermoelectric puzzle. They have reported this major breakthrough in the journal Science. Prof. Kanishka Biswas and his group doped (internally introduced) Silver Antimony Telluride with Cadmium (Cd) and used an advanced electron microscopy technique to visualize the resultant ordering of atoms in nanometer scale. The nanometer-scale atomic ordering scatters phonons that carries heat in a solid and enhances electrical transport by delocalizing the electronic state in the material.

Previously reported state of the art material is exhibiting the thermoelectric figure of merit (ZT) in the range 1.5-2 in the mid-temperature range (400-700 K). The team reported a record increase in thermoelectric figure of merit (ZT) to 2.6 at 573 K, which can provide the heat to electrical energy conversion efficiency to 14 %. Prof. Biswas is now trying to commercialize the high-performance thermoelectric materials and devices; in collaboration with TATA steel where lots of waste heat is generated in steel power plant. This work is supported by Swarna-Jayanti fellowship and project fund from Science and Engineering Research Board (SERB) and Department of Science & Technology (DST), India, along with support from New Chemistry Unit (NCU) & International Centre for Materials Science (ICMS), JNCASR, Bangalore.