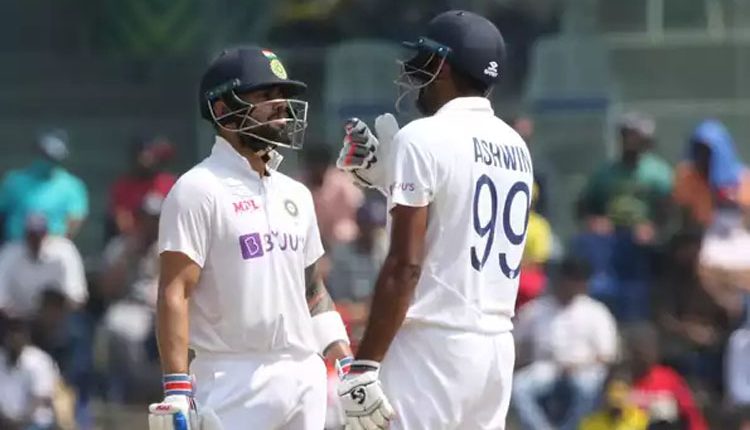 Chennai, Feb 15 (FN Agency) In a frenetic morning session on Day 3 of the second Test in Chennai, England kept the wickets column ticking away while India did the same to the runs section as the hosts stretched the lead past 350. Ben Foakes’s excellent wicketkeeping to the spinners caused many a batsman’s downfall but Virat Kohli was unmoved as he ensured the runs came at a good rate, with R Ashwin supporting his endeavour, as they put on an unbroken 50-run stand off only 71 deliveries to take India to 156 for 6 at Lunch on Monday (February 15).

A bizarre run out gave England their first wicket of the day as Pujara, who played the ball to short leg, tried to get back but the bat got stuck into the pitch and he ended up short. Rohit Sharma’s stay was also a short one as he was drawn out of the crease by Leach and the opener failed to have his back foot behind the line. Rishabh Pant’s promotion did not materialise into anything productive as the left-hander was also stumped off Leach, with Foakes showing fine skills behind the stumps. There were a couple of lucky breaks in the first hour – Ajinkya Rahane got an under edge which was too tough for Foakes to take while Kohli drove through cover and nearly gave a catch to Rory Burns. Moeen Ali was also guilty of bowling a couple of loose deliveries – a full toss and a short ball which Rahane put away – giving India a breather. But Rahane eventually fell to Moeen, coming down the track and getting an inside edge to short leg where Ollie Pope held on to a good catch.

Kohli, meanwhile, showcased good application – solid with his defence and leaves, on the money with strike rotation, and cashing in on the loose deliveries – to stretch the lead. It took Kohli 20 deliveries to score his first runs but once he got going, he didn’t appear in too much trouble even as the batsmen at the other end struggled. There were those that spun sharply and beat the bat, but Kohli was quick to put it behind him and carried on confidently as he helped stretch the lead past 300. Axar Patel provided some support to the Indian skipper until the left-hander was pinned in front by Moeen. R Ashwin came in next and he preferred to attack straightaway, sweeping, reverse-sweeping, and coming down the track. Stuart Broad was finally given the ball in the second innings – as late as the 45th over – and Ashwin had no problems in flicking him away for a four, and also got a lucky break when Stokes was bit too close in at slip and put down a tough chance. Both Kohli and Ashwin had scored five boundaries apiece before the interval, with 102 runs coming in the session off 30 overs.