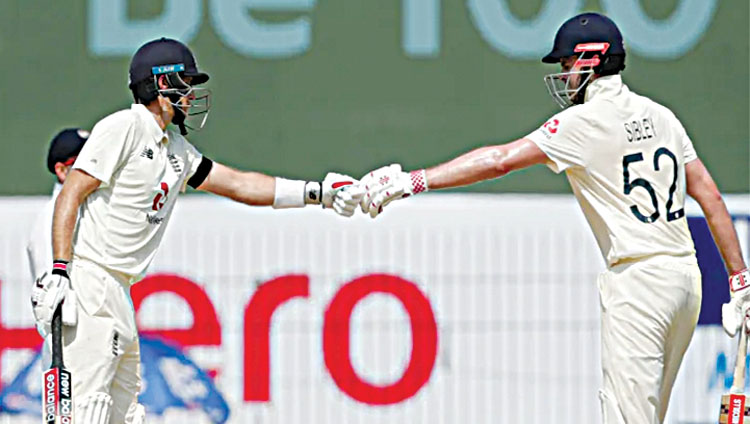 Chennai, Feb 5 (Agency) Joe Root came into this series on the back of two impressive tons in Sri Lanka last month. On Friday (February 5), he made a statement on the very first day of the series with his third successive ton that gave England early honours in the opening Test in Chennai. Root batted with authority, continuing from where he left in Sri Lanka, to register a century in his 100th Test match as England ended day 1 at 263/3. On a placid surface, he had no hesitation in opting to bat first after welcoming back Rory Burns, Ben Stokes and Jofra Archer. India on the other hand made a few changes as well with some of the heroes from Gabba making way for the established stars to return. Burns then blunted the new ball alongside a resolute Dominic Sibley to get England off to the perfect start in the series. Even the introduction of R Ashwin in just the 8th over didn’t help India’s cause as the opening duo registered more than 50 for the first wicket.

Just when India appeared to be frustrated, moments before the lunch break, Burns gifted his wicket by attempting a reverse sweep as the ball lobbed off the glove to be caught by Rishabh Pant. Moments later, England suffered a double blow when Jasprit Bumrah found some reverse swing to send Dan Lawrence back to the pavilion for a five-ball duck. Two wickets in the space of three overs just before the lunch break did cause panic in the England camp but India hardly had anything to cheer for since then. Root and Sibley showed tremendous patience in the first half of the second session, taking no risks whatsoever and were smart enough to target India’s 4th and 5th choice bowlers – Shahbaz Nadeem and Washington Sundar. While Root employed the sweep to good effect, Sibley’s usage of his feet was exemplary. At one stage, the two batsmen fetched three boundaries in the space of eight deliveries when Washington and Nadeem were bowling in tandem. Kohli eventually had to turn back to Bumrah and Ashwin but Root and Sibley grew in confidence and were well set by that time.

The wicketless second session saw England score only 73 runs but they made up for that in the final session by taking on the tired legs. Sibley continued to bat in the same vein, biding his time but Root switched gears. Batting on 45 off 100 at one point, Root started dealing in boundaries with the highlight being one through the cover off Bumrah to bring up the century stand. The 30-year-old got to his 20th Test ton off just 164 deliveries, with 55 runs coming in 64 balls in the final session alone. Even the new ball didn’t stop England’s charge with Root slog-sweeping Ashwin for the first six of the Test. Quite often on placid wickets, teams need a piece of magic out of nowhere to get breakthroughs. Bumrah provided exactly that in the final over of the day. Sibley, who had battled his way to 87, couldn’t keep out the low full toss that was well directed at a good pace and was adjudged leg-before-wicket. India might need a lot more of that on Saturday to entertain hopes of keeping England to anything less than 400.