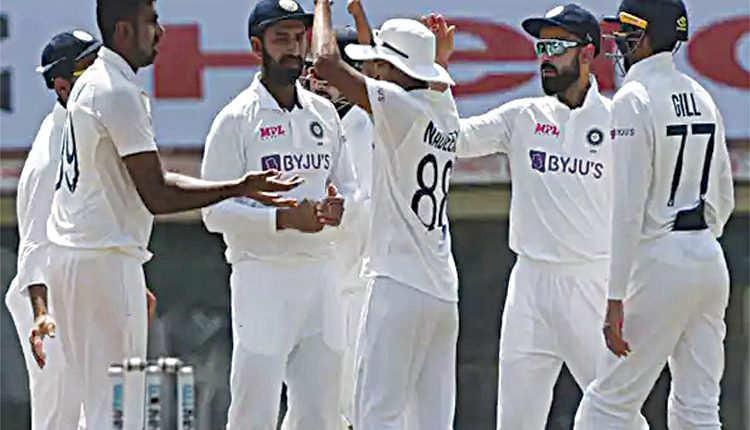 Chennai, Feb 8 (FN Agency) England, adopting a cautious approach right towards the end of their second innings, set India a huge target of 420 to win the Chennai Test on Monday (February 8). England were expected to give themselves more overs to defend the target. However, they bowled only 13 overs at the hosts before the close of Day 4 and will have another 90 on the final day to try and get a series lead. At stumps, India were 39/1, requiring another 381 runs for victory.

The day began with the local boys Ravichandran Ashwin and Washington Sundar looking positive in the middle. Washington punished anything that was pitched short or too full whereas Ashwin stepped down the wicket to Dom Bess to fetch a huge six over long on. Washington eventually got to his half-century but the flourishing partnership was ended when Jack Leach was introduced into the attack with Joe Root handing him a newish ball. After dismissing Ashwin with a delivery that bounced more than usual to take his edge, Leach also got rid of Shahbaz Nadeem. The two wickets forced Washington to open up further and inch towards a maiden Test hundred but James Anderson picked up the wickets of Ishant Sharma and Jasprit Bumrah to leave the youngster stranded on 85. On expected lines, England didn’t enforce the follow on but at the same time didn’t change the batting order either. The usual openers walked out to the middle and Ashwin then rocked the visitors by getting rid of Rory Burns off the first ball. The left-hander pushed hard at a delivery that turned and bounced after pitching with Ajinkya Rahane at first slip doing the rest.

In the post lunch session, Joe Root came out all guns blazing after Ashwin removed Dominic Sibley. The sweeps and reverse sweeps were on display as the England captain looked at total ease on a surface where watchful batting was the norm. At one stage, he raced to 25 off just 12 deliveries but Ashwin struck again at the other end with Ben Stokes finding a thin edge through to the ‘keeper. While Root finally departed for 40 after getting trapped plumb in front by Jasprit Bumrah, Jos Buttler signalled his intentions with a six off Nadeem. With a lead of 360 going into the tea break, England were expected to fetch a few quick runs before opting for the declaration. However, the visitors left everyone puzzled with their tactics after Ollie Pope’s dismissal. Having made 133 in 29 overs, England suddenly motored along only just above two runs an over. Not only were they not pushing the score, they were also eating up precious time that they would have needed to bowl India out in the second innings. Adopting a safety first approach, England eventually took the lead past 400 before Ashwin came back into the attack to polish off the tail and pick up a five-wicket haul for the 28th time in his career.

One has to wonder when England had plans to declare if not for Ashwin picking up those last two wickets in quick time. Chasing 420 for an unlikely win, India were jolted early before stumps. Having won his battle against Jofra Archer where he pulled the pacer in an authoritative manner for a six, Rohit Sharma fell to Leach. Pitching on a good length, the ball spun away from the batsman to beat his outside edge and crash into the off stump. While Cheteshwar Pujara and Shubman Gill did well to bat out the tricky few overs before stumps, pulling off another heist similar to the one in Gabba is looking unlikely at this stage.

Rupee up 7 paise against USD