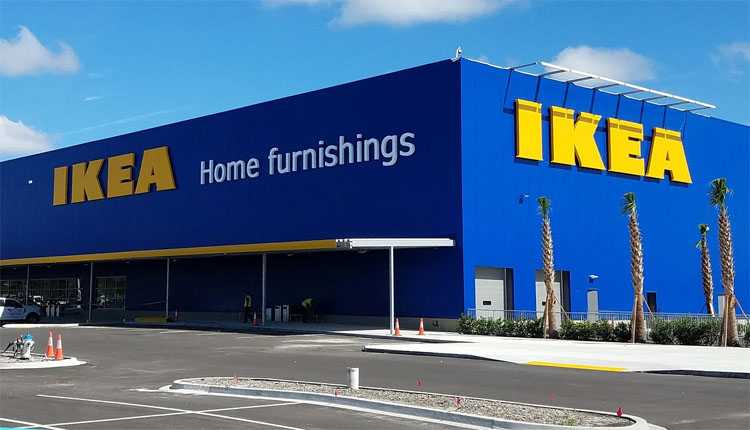 Lucknow, Dec 2 (Agency) IKEA, one of the world’s largest companies making furniture and home applications, is going to start its outlet in Noida in just a few weeks, thus bringing lot of jobs in Uttar Pradesh. The Swedish company, which is opening its outlets in 52 countries and providing a large number of jobs and business, is preparing to open around a dozen outlets in UP by investing Rs 5000 crores. The Yogi Adityanath government has provided 47833 square meters of land in Noida to make IKEA an outlet. IKEA is going to start its largest outlet in India in Noida.

The Yogi government has achieved another major success in increasing employment and trade in UP through the investment of renowned companies of the country and the world. Official sources here on Tuesday said that along with allotting land to IKEA in Noida, the state government has shelved a plan to invest around Rs 5000 crore in the company. IKEA, which has opened more than 433 centers in 52 countries of the world, is preparing to invest big in UP. Starting with Noida, IKEA plans to open at least three major outlets in Purvanchal and Central UP. The plans for other outlets will be finalised with the opening of Noida Center. The company will start all its outlets by 2025 according to the plan . IKEA’s investment, which has provided a large number of jobs and trade by opening its centers in countries of America, Europe, North Africa, Middle East and East Asia, is believed to generate large number of jobs. According to experts, the company will sell its products online as well as open franchises and showrooms in different cities. Through which a large number of people will get the opportunity of trade and employment. In December 2018, the company signed an agreement with the Uttar Pradesh government to invest Rs 5,000 crore in Noida and other cities of the state.

According to Industries Minister Satish Mahana, 47,833 square meters of land has been allotted to IKEA in Noida. IKEA started its first center in Hyderabad at a cost of Rs 700 crore in 2016. IKEA plans to open a total of 25 centers in India by 2025 by investing Rs 10500 crore. About half of them are from UP alone. Mr Satish Srivastava, co-chairman of the UP Chamber of Commerce, says that the Yogi government has laid a big foundation for economic development by bringing only two outlets in south India to UP, IKEA. With such companies entering the UP market, business and employment will increase, people will be able to get quality and world class furniture and other products at low prices. The Yogi government’s strategy to attract industry and investors is going to make a big contribution towards making UP self-reliant. Large scale investment of a company like IKEA can indirectly connect about 50,000 people with employment and trade. Spokesperson of the UP Government and Cabinet Minister Siddharth Nath Singh says that the next few months are very important in terms of employment and trade. Major companies of the country and the world are continuously coming forward to invest in UP. The state government is working hard at every level to materialise it. The process of the Yogi government to connect every youth of the state with employment and trade is moving ahead with full speed. Companies are coming one after the other. We are realising a self-reliant UP campaign, the minister stated.