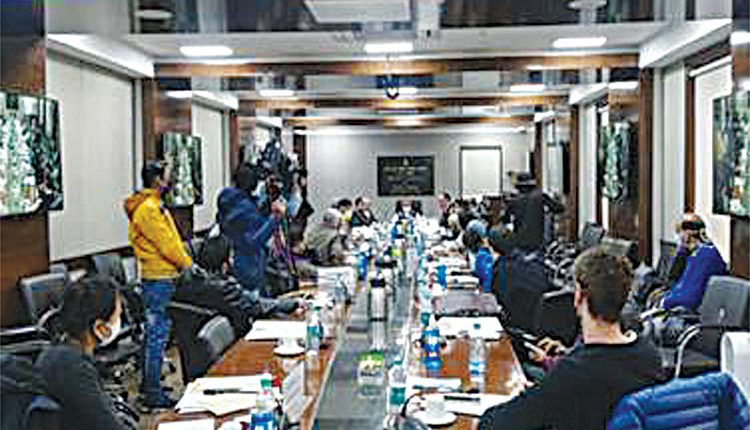 New Delhi, Dec 22 (Mayank Nigam) Interacting with members of the International media from the Foreign Correspondents’ Club of South Asia Union Agriculture Minister Shri Narendra Singh Tomar said that the agriculture sector is the backbone of the Indian economy and under the leadership of the Prime Minister Modi the focus will be on doubling farmer’s income by 2022. He explained that the Farmers Produce Trade and Commerce (Promotion and Facilitation) Act 2020 and Farmers (Empowerment and Protection) Agreement on Price Assurance and Farm Services Act 2020 and the Essential Commodities Amendment Act 2020 are the biggest agricultural reforms in the country so far. The reforms will provide farmers market freedom, encourage entrepreneurship, access to technology and they will transform agriculture. He also said that India being a large democracy functions on the principle of ”sabka saath, sabka vikas, sabka vishwas”.

The Agriculture Minister outlined the various measures and reforms undertaken by the Ministry of Agriculture and Farmers Welfare during the last six years. He said that Indian agriculture has come a long way from food scarcity to food surplus. The Government therefore had realised that pro farmers reforms were essential to uplift the sector i.e. the backbone of the economy. Every effort is being made to create an eco system of farmer friendly policies to see that the sector goes from strength to strength. The Pradhan Mantri Kisan Samman Nidhi (PM-KISAN) was introduced by the central government in February 2019 under which Rs. 6,000 per year is transferred to the beneficiary farmer’s account per year in three instalments. Since the inception of the scheme, a total amount of RS. 95979 crore have been released so far and 10.59 crore farmer families have benefitted. A special drive has been undertaken to provide concessional credit to PM-KISAN beneficiaries through Kisan credit card.

He said that Neem Coated Urea was introduced since 2015-16 for reduced use of chemicals, improved soil health, overall increase in crop yields and reduction in the use of urea for non-agricultural purposes. Agriculture Infrastructure Fund (AIF) was launched on 9th August, 2020. The aim of the fund is to provide medium to long term debt financing for investment in viable projects for post-harvest management. Shri Tomar also spoke about the Farmer Producer Organisations (FPOs). Scheme for Formation and Promotion of 10,000 FPOs with a total budgetary provision of Rs. 6865 crore has been launched on 29.02.2020. Under the scheme, formation of 10,000 FPOs across the country is targeted in five years. The Minister reiterated that reforms have been made in the interest of farmers and will bring about a new era in Indian agriculture. The Government has had many rounds of talks with farmer unions and is willing to continue the dialogue on contentious issues, clause by clause, with an open mind.

There is an ‘Advertisement Revolution’ in Delhi