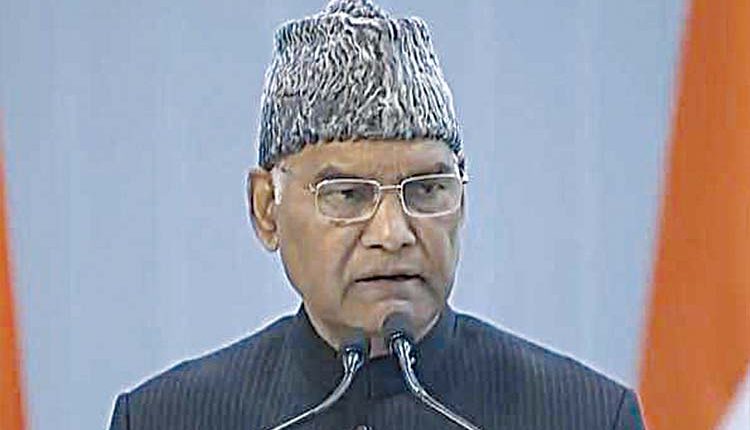 Ahmedabad, Nov 25 (Agency) President Ram Nath Kovind on Wednesday favoured dialogue over deadlock, pointing out that in a democratic system, the medium of dialogue is the best medium for not allowing the debate to become a dispute. Speaking at the inauguration of the 80th All India Presiding Officers’ Conference at Kevadia, Gujarat, he noted that in a Parliamentary democracy, the Opposition also has an important role along with the ruling party, and, therefore harmony, cooperation and meaningful deliberation between the two is necessary.
“It is responsibility of Presiding Officers to provide congenial atmosphere for a healthy debate to the peoples’ representatives in the House and to encourage courteous dialogue and discussion,” he underlined in his speech. Mr Kovind felt fairness and justice were the bedrock of India’s Parliamentary democratic set-up. “The chair of the Speaker of the House symbolises both dignity and duty. It demands sincerity and sense of justice. It also symbolises impartiality, righteousness and fairness and it is expected from Presiding Officers that their conduct is inspired by these lofty ideals,” he said. He wanted that Members and Presiding Officers should maintain each other’s dignity for the betterment of people and progress of the country and observed that the democratic system has proved to be the most effective means of peoples’ welfare. “Therefore, it is a matter of pride to be a Member of the Parliament and the Legislature.”

Holding the Presiding Officers in high esteem, MPs and MLAs earned respect for themselves and for the Parliamentary democracy itself, he added. Describing Parliament and Legislative Assemblies as the “cornerstone of our Parliamentary system, he said they have an important responsibility to work for a better future of our countrymen. “In the last few decades, expectations, aspirations and awareness of the general public have been on the rise. Therefore, the role and responsibilities of Parliament and legislatures have come into focus even more,” he said and observed that peoples’ representatives were expected to remain true to the principles of democracy. “The biggest challenge before democratic institutions and peoples’ representatives is to live up to the expectations of the people,”he said.
Referring to the theme of this year’s conference ‘Harmonious Coordination between Legislature, Executive and Judiciary – Key to a Vibrant Democracy’, the President said all the three organs of state – the executive, the legislature and the judiciary – have been working in harmony and the tradition has taken strong roots here in India. He exuded confidence that our democratic system will be further strengthened by adopting the conclusions drawn from the deliberations during the conference.