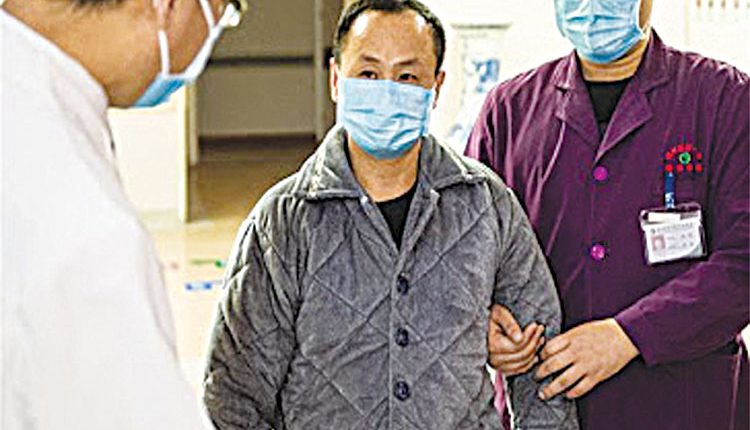 Moscow, Dec 1 (Bureau) Exactly one year ago the first patient contracted what became known as the novel coronavirus in China’s Wuhan, triggering a global pandemic that has infected over 62 million people and killed more than 1.4 million as of Tuesday. Despite local public health authorities in Wuhan first acknowledging 27 patients were sicken of an unknown viral pneumonia on December 31 last year, a study tracing the first group of COVID-19 patients released on Jan 24 in the Lancet, a renowned medical journal, revealed that the earliest infection in Wuhan appeared on December 1. Wu Wenjuan, a doctor who treated this patient at the Wuhan Jinyintan Hospital and was among the group of doctors who produced the study in the Lancet, identified this patient as a male in his 70s, the 21st Century Business Herald, a Chinese business publication, reported in February. According to Wu, the first known COVID-19 patient in Wuhan was struggling with cerebral infarction and dementia. He first visited another hospital in Wuhan and was only transferred to the Wuhan Jinyintan Hospital on December 29. Doctors who treated him were able to establish the date of his infection based on testimonies from his relatives, Wu added.

Because of his preexisting conditions, the patient mostly stayed home after his initial infection and never visited the Huanan Seafood Market, where a cluster of COVID-19 patients were identified later, Wu said. When reached by phone this week, Wu declined to share more details about the first COVID-19 patient in Wuhan or if he survived the infection, citing hospital policies. The discovery of the first COVID-19 patient by Wu’s team showed that the new coronavirus likely did not jump from wild animals to humans at the Huanan Seafood Market, which was initially believed to be where the virus emerged because wild animals were being traded there.

Initial Cover-Up
By the end of December last year, the rising number of patients exhibiting pneumonia-like symptoms began to fill hospitals in Wuhan. Zhang Jixian, a doctor at the Hubei Hospital of Integrated Traditional Chinese and Western Medicine where seven such patients were being treated, first sounded the alarm on the dangers of a new deadly virus, the official Xinhua News Agency reported in April. According to the Xinhua report, Zhang first treated a female patient with pneumonia-like symptoms on December 26 last year and couldn’t identify the virus that was causing her symptoms. The next day, the patient’s husband exhibited identical symptoms. Zhang decided to ask the old couple’s son to come into the hospital for tests and the son’s computerized tomography (CT) scan showed identical lung infection as his parents had. As all three members of the same family exhibited identical lung infections caused by a new mysterious virus, Zhang reported the situation to the Wuhan Center of Disease Control on December 27 last year.

As more and more doctors in Wuhan became aware of a new epidemic taking place in the city, a number of them began to warn colleagues and friends of a virus, similar to the one that caused the the Severe Acute Respiratory Syndrome (SARS) epidemic in 2003, was circulating among local residents. However, when screenshots of the doctors’ exchanges of a new “SARS-like virus” being circulated in the city emerged on Chinese social media, local police in Wuhan summoned eight of the doctors who took part in such discussions and punished them for “spreading false rumors,” the state-run China Central Television (CCTV) reported on January 1. The widely recognized whistle-blower doctor Li Wenliang, who later died of COVID-19 infection, was among the eight doctors who were punished by the Wuhan police for “spreading false rumors.” While denying a deadly epidemic was taking place in the city, the Wuhan Health Commission continued to issue daily updates on the “mysterious viral pneumonia situation” in the city in early January. On January 11, the Wuhan Health Commission said in its report that the city only identified 41 patients who were confirmed to have contracted the new “viral pneumonia” and all those patients were infected before January 2. “After January 3, we did not discover newly infected patients. As of now, we have not found any doctors and nurses becoming infected and there has been no evidence of ‘human-to-human transmission’ [of the new virus],” the report from January 11 said. Before the official Xinhua News Agency released the directive from Chinese President Xi Jinping who asked local authorities to take the emerging epidemic seriously on January 20, local authorities in Wuhan only identified 198 confirmed COVID-19 cases in the city without admitting that the new virus could be transmitted between humans. After January 20, China placed Wuhan and neighboring cities in the Hubei province under stringent lockdown for more than two months and successfully controlled local COVID-19 outbreaks in the country by April.

Geopolitical Controversy
As COVID-19 infections spread quickly around the world in spring, a number of countries led by the United States began to blame China for failing to contain the new deadly virus in a timely manner. US President Donald Trump criticized China openly on a number of occasions and even taunted the idea of seeking compensations from Beijing for the economic damages caused by the devastating pandemic. Chinese authorities dismissed the criticism. As a number of Chinese doctors, including a team under the Hubei Engineering Research Center of Viral Vector at the Wuhan University of Bioengineering, continued to trace signs of early infections in Wuhan, Chinese state media began to focus on alternative theories that argued the new coronavirus could have first appeared outside of China.

Foreign Ministry Spokesman Zhao Lijian even shared conspiracy theories on Twitter that blamed the US military for bringing the new deadly virus to Wuhan. In recent weeks, Chinese state media including the People’s Daily and China Daily began to focus on a study from a group of medical researchers in Italy who claimed to have found evidence of COVID-19 being circulated in the country’s Lombardy region as early as September last year. The study from Italy relied on antibody test results of blood samples collected between September 2019 and March 2020. But other medical experts expressed concerns over the accuracy of antibody tests in detecting COVID-19 infections.