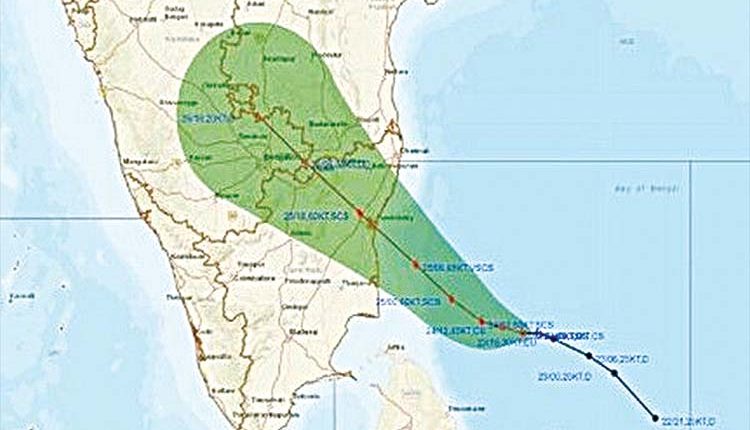 New Delhi, Nov 25 (Agency) The India Meteorological Department on Wednesday said that the super cyclonic storm Niwar is very likely to cross Tamil Nadu and Puducherry coasts between Karaikal and Mamallapuram around Puducherry during mid-night of November 25 and early hours of 26 as a very severe cyclonic storm with a wind speed of 120-130 kmph gusting to 145 kmph.

In a statement, the IMD further said that severe cyclonic storm NIVAR over southwest Bay of Bengal moved west-northwestwards with a speed of 11 kmph during past six hours and lay centred at 0830 hrs IST on Wednesday over southwest Bay of Bengal about 240 km east-southeast of Cuddalore, about 250 km east southeast of Puducherry and 300 km south southeast of Chennai. It is very likely to intensify further into a very severe cyclonic storm during next six hours. Due to this weather phenomena, a fairly widespread to widespread rainfall thunderstorm activity is very likely over coastal and north interior Tamil Nadu, Puducherry and Karaikal, south coastal Andhra Pradesh and Rayalaseema during November 25-26 and southeast Telangana during November 26. Isolated extremely heavy rainfall activity is also expected over coastal and north interior Tamil Nadu and Puducherry (Thanjavur, Tiruvarur, Nagapattinam, Cuddalore, Chennai, Kanchipuram, Chengalpattu, Myladuthirai, Ariyalur, Perambalur, Kallakurchi, Villupuram, Tiruvannamalai, Puducherry and Karaikal districts), over Nellore and Chittoor districts of Andhra Pradesh on November 25, and over Rayalaseema and southeast Telangana on November 26.

The tidal wave of about 1-1.5m height above the astronomical tide is very likely to inundate the low lying areas of north coastal districts of Tamilnadu and Puducherry near the place of landfall. Due to this severe cyclonic storm, a substantial damage is expected over Nagapattinam, Myladuthurai, Cuddalore, , Villupuram & Chengalpattu districts of Tamilnadu and Karaikal and Puducherry and it is likely that the total destruction of thatched houses, extensive damage to kutcha houses. Some damage to old pucca houses whereas there is a potential threat from flying objects. The bending or uprooting of power and communication poles can be witnessed during the storm along with major damage to Kutcha and and Pucca roads, flooding of escape routes, disruption of railways, overhead power lines and signaling systems as well in the affected areas.

There could be widespread damage to standing crops, plantations, orchards, falling of green coconuts and tearing of palm fronds. Blowing down of bushy trees like mango whereas the the small boats, country crafts may get detached from moorings. The fishermen have been advised not to venture in the sea as there is a total suspension of fishing operations and authorities have been asked to evacuate people from the from coastal areas and coastal hutment dwellers to be moved to safer places. People have been asked to remain in safe places and indoors in the affected areas.