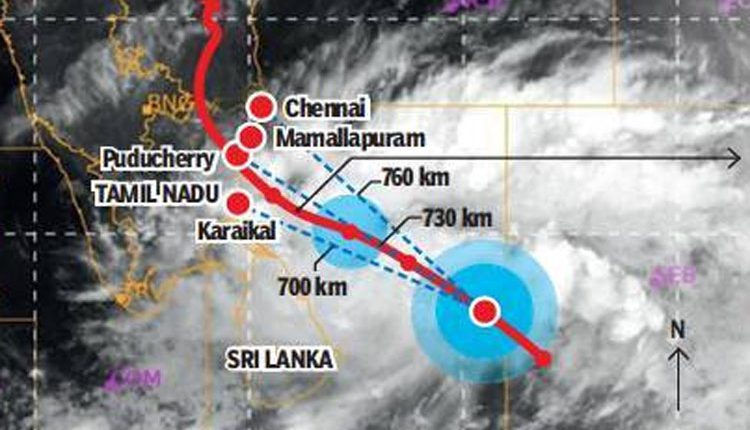 Chennai, Nov 24 (Agency) Heavy rains lashed Chennai city and suburbs, as the cyclonic storm ‘Nivar’ over the southwest Bay of Bengal moved westwards with a speed of five kmph during the past six hours and lay centred over southwest Bay of Bengal about 380 km eastsoutheast of Puducherry and 430 km south-southeast of Chennai. In its latest update on Tuesday, the Met office said it is very likely to intensify further into a severe cyclonic storm during the next 12 hours and into a very severe cyclonic storm during subsequent 12 hrs.
It is very likely to move west-northwestwards for next 12 hours and then northwestwards and cross the Tamil Nadu and Puducherry coasts between Karaikal and Mamallapuram, about 55 km from here, around Puducherry tomorrow late evening as a very severe cyclonic storm with a wind speed of 120-130 kmph gusting to 145 kmph. The met office has forecast extreme heavy rains in eight districts of the state. Tamil Nadu Chief Minister Edappadi K Palaniswmi, who reviewed the cyclone preparedness, said a holiday has been declared for all government offices across the State tomorrow.