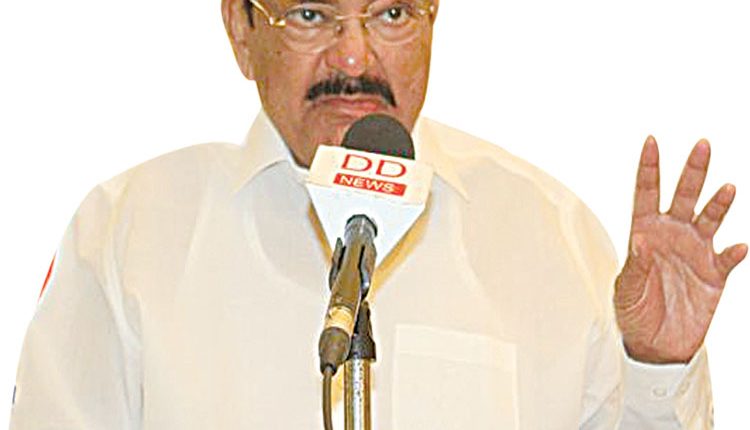 New Delhi, Jan 20 (FN Bureau) The Vice President, Shri M. Venkaiah Naidu today said that Covid-19 pandemic has taught us the importance of good ventilation and sunlight for our health. He expressed his disapproval of the growing tendency of living in closed spaces and emphasized that proper air circulation must be ensured in homes, offices, restaurants and conference halls. The Vice President made these remarks in Hyderabad today while virtually releasing the book titled- ‘A textbook of Urban Planning and Geography’ written by Dr. Sameer Sharma, Director General and CEO of the Indian Institute of Corporate Affairs. Shri Naidu rued that in their aspiration for a modern lifestyle, city dwellers have lost connection with nature and many a time, we find that even sun rays don’t penetrate our homes. He advised city planners and architects to give precedence to comfort over the fashion and design structures and buildings which exist in harmony with nature. He wanted cities to have more breathing space such as parks, gardens and playgrounds. A tightly paved urban area is one of the reasons for runoffs during floods, he said.

Highlighting the principles of accessibility, inclusivity and sustainability for good urban planning, the Vice President said that the ad-hoc approach of city planning must be replaced by a long term and forward-looking approach to create liveable cities. Stressing that ‘a city cannot be for the few’, he expressed his disappointment that many urban poor often get excluded in the cityscape and called for making inclusivity an integral component of city planning. Shri Naidu also emphasised the need for sustainability in every component of city planning – be it the financing of civic amenities, be it encouraging green buildings, recycling waste, harvesting rainwater or promoting public transport. Expressing concern over the perennial phenomenon of urban flooding in many cities due to concretized structures, the Vice President underlined the need to live in harmony with nature. “Lakes that serve as natural buffers must be reclaimed in order to avoid annual flooding”, he said. To reduce vehicular pollution, Shri Naidu wanted incentivisation of public transport along with other green initiatives like car-pooling, use of CNG or electric vehicles. On the part of citizens too, he called for conscientious behavioral change in the way they use road space. “There should be a people’s movement to promote cycling, which is not only a healthy option but also reduces pollution”, he said. Emphasizing the need to accommodate and protect the interests of the homeless and poor in the city, the Vice President said that we must make sure that the migrant coming from a rural area must not live in substandard conditions and the domestic help living on the city’s periphery must not struggle for transit to work.

Observing that improving the ‘Ease of Living Index’ should be the goal of all the cities in India, Shri Naidu commended the cities that have been appearing consistently in the top 10 in these rankings. The Vice President said that planners should not only focus on making cities liveable urban centres, they should also work for raising the happiness quotient of the people. He suggested that urban planning must be done with local aesthetics and local traditions. “In our blind imitation of the West, we have made all our cities look alike- uniform, anonymous and without any reference to its history”, he said. Cautioning that a city that doesn’t recognise its past cannot have a future, Shri Naidu called for the preservation of heritage and traditions in historic cities. Calling cities as the engines of economic growth in any modern economy, the Vice President said that cities are the crucible of our multicultural and diverse nation. Noting that, with time, each city develops a certain character that becomes unique to it, Shri Naidu called for preserving the unique qualities about them. Recalling India’s great legacy in urban planning, the Vice President cited the examples of cities like Harappa and Mohenjodaro, Indraprastha, Madurai and Kanchipuram which were known for their advanced city planning. Drawing attention to the increasing trend of urbanization, the Vice President said that the share of urban population is expected to reach 60 per cent by 2050 in India. This rapid urbanization, he said, brings in its share of opportunities and challenges.

Listing some of the challenges such as limited resources of land, water, migration from rural areas and pressure on city’s infrastructure, the Vice President said that how we go about managing these factors will determine the fate of a city. Stressing the need to ensure access to facilities like transport, housing, and civic amenities like water, gas and waste management, the Vice President opined that civic bodies must adopt self-financing models that make operation of public utilities viable. “Only when citizens pay for the resources they use, even if it is a nominal fee, brings a sense of responsibility and ownership in the users. This is a proven best practice, in India and elsewhere”, he said. The Vice President also emphasized that cities must have vibrant public spaces and not secluded apartments alone. Noting that, nowadays, there is very little shared activity and very little feeling of a community togetherness, he said that a community’s bonding grows only if the families interact regularly, share and learn from each other’s experience. “We should spend money on building libraries, public parks and museums. We should plan for cultural exhibitions, auditoriums and public recreation centres for people to mingle and exchange ideas”, he added. On rural-urban migration, the Vice President was of opinion that we should go to the root of the issue and see why people are migrating out of rural areas. Observing that people leave villages mainly due to unemployment or lack basic amenities, Shri called for addressing these issues in rural areas along with improving the urban liveability.

Six hours of journey for an education, but they believed it was worth it