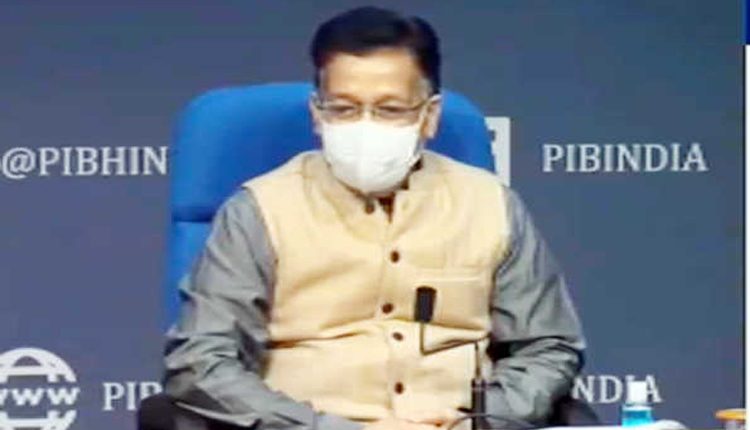 New Delhi, Nov 17 (Bureau) In an effort to curb the spread of Coronavirus-19, the Centre will increase manpower to inspect the 4,000-odd containment zones in the national capital. Responding to Delhi Chief Minister Arvind Kejriwal’s appeal for Central help to contain the spread of Covid-19 in the national capital, Union Health Ministry Secretary Rajesh Bhushan said “manpower will be increased to inspect nearly 4,000 containment areas in Delhi following the government-induced Standard Operating Procedures,” He said “3,500 ICU beds are available in Delhi now. It will be increased to 6,000 ICU beds in the next few days. House to house survey will be done in containment zones in Delhi. This will also be done in other vulnerable zones. Total 7,000-8,000 teams will be put on this.” Mr Bhushan said the step will be taken following the government-induced Standard Operating Procedures.

The urgent action taken by the Centre to curb the spurt in Covid cases in Delhi, include ramped up number of overall beds including ICU beds, doubling of testing to 1-1.2 lakh per day, enforced quarantine of contacts and enforcing containment zone SOPs among others, the Health Ministry official said. NITI Aayog member V K Paul, who was present at the press conference, told reporters that house-to-house survey will be done in containment zones and in other vulnerable zones by 7,000-8,000 teams, which would be given this responsibility. Apprehending a surge in Covid cases in the wake of the festive season and recent elections in Bihar and Madhya Pradesh, the officials said the effect of elections, Durga Puja and Diwali would be seen in the coming weeks, and a careful watch would have to be kept on new cases. Giving an update on the vaccine of Serum Institute that had completed its Phase-3 trial, while five other vaccines were under trial in the country, Mr Paul said “vaccine discussion has raised hopes in recent days. Our vaccine trials are going on with ICMR. Phase-3 of the Serum vaccine with ICMR is completed. Bharat Biotech will start Phase-3, vaccine results are expected anytime soon. Permission for Sputnik vaccine’s Phase-3 trial has been received. Five vaccines are under trial and two out of five are under phase 3,” the NITI Aayog official said. Urging those with symptoms to get themselves tested, Mr Bhushan said daily testing in the national capital had “plateaued in past while the infection was spreading, this meant that many having infection were not getting tested”, adding that they should not be hesitant to get tested.

He said “testing is now on demand – if there is even one symptom, get tested.” Mr Bhushan pointed out that 10 states and UTs, led by Maharashtra, Delhi, Kerala and West Bengal, accounted for 76.7 per cent of total Covid-19 cases in the country. “In the last 45 days, the total number of Covid-19 recovered cases has increased and the number of active cases has decreased,” the Health Secretary said speaking on the recent Covid situation.

WHO praises UP for Covid-19 management