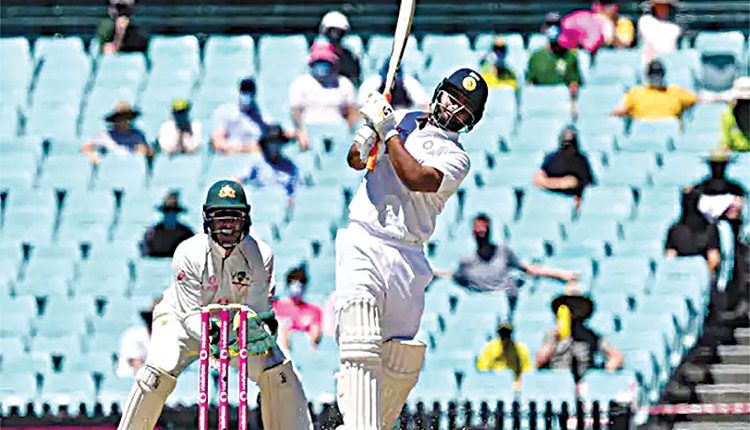 Sydney, Jan 11 (FN Agency) A bruised and battered India line-up couldn’t run between the wickets for more than a session. They had a player with a fractured thumb waiting to bat next. They were without their original captain and best batsman. They copped one blow after another off short-pitched bowling, against one of the best bowling attacks. And yet, against all odds, India produced one of the most dramatic displays of patient batting and exemplary fighting spirit to pull off a draw that hardly anyone saw coming when the fifth day started. With 97 overs to survive in the day and eight wickets in hand, India scraped through under immense pressure led by the partnership between Hanuma Vihari and R Ashwin that lasted 42.4 overs for 62 runs, to keep the series level on 1-1.

Even though Rishabh Pant and Cheteshwar Pujara had set up India’s fight early in the day with a century stand that even gave the team a chance of a win initially, the highest praise will be kept for Vihari and Ashwin for the character they showed. The two came together against the second new ball when there were more than 40 overs left in the day, an under-pressure Vihari had already hurt his hamstring, and Ashwin was welcomed by a barrage of short balls that dented his body. The two made the Australia bowlers toil under sun with a blockathon to draw some frustrations from the hosts towards the end of the day. Nathan Lyon bowled 46 relentless overs, Pat Cummins pounded the pitch throughout the day and Josh Hazlewood found reverse swing, but only to see an unfazed batting pair that defended almost everything that came their way. Unable to run, Vihari finished unbeaten on 23 off 161 after batting for just under three hours, and Ashwin’s vigil saw him score 39 runs for his 128-ball stay. Australia will also rue the four catches they dropped on the day, three of them by captain Tim Paine that included two off Pant and one off Vihari at the end of the day, and one by substitute fielder Sean Abbott, off Ashwin.

That Ashwin and Vihari could think of salvaging a draw was down to the 148-run partnership between Pujara and Pant, after Ajinkya Rahane was caught at short leg for Lyon’s first wicket of the match. Pant was promoted to No. 5, perhaps to counterattack, and he started it with an assault against Lyon in his scintillating knock of 97. Pant’s domination of the bowlers and the partnership with Pujara was so impactful that Australia had to change their bowlers regularly and Pujara marched on with his natural game while also picking up boundaries. Pant started slow though, crawling to 5 off 33, as India were 102 for 3 in the first session when he joined Pujara. He cashed in after getting a life on 3, when he edged Lyon behind but Paine put him down. Pant, already batting with an injured elbow, also took a few blows on his body from Cummins on the thumb and once on the helmet, before he tore into Lyon.

With mid-on in the circle, he danced down and lofted the spinner for a four and a six off successive deliveries, before collecting two more fours in the next over to overtake Pujara. Lyon changed ends soon but that didn’t stop Pant. On 37, he charged down even with a long-on and long-off in place for two consecutive sixes in the V down the ground. Lyon would have had Pant on 56 too for an outside edge when Pant poked outside off, but Paine put him down again. Pant also unleashed a few punchy drives and pulls off the fast bowlers, and went after Lyon again after lunch with audacious hitting down the ground to race into the nineties. But Lyon pitched one wide of Pant when he stepped out for another heave and the batsman got a leading edge to a diving backward point.
Pujara, meanwhile, reached his 27th Test fifty and crossed 6000 runs in the format, almost replicating Pant with three successive fours off Cummins once the second new ball was taken. He used his feet often against Lyon to either get to the pitch of the ball or cut off the back foot, and saw through Hazlewood’s spell of reverse swing carefully until the fast bowler got the new ball and got one to hold its line to rattle Pujara’s stumps for 77.
Brief Score: Australia- 338 and 312 for 6 dec; India- 244 and 334 for 5 (Pant 97, Pujara 77, Sharma 52, Ashwin 39, Vihari 23, Hazlewood 2-39)