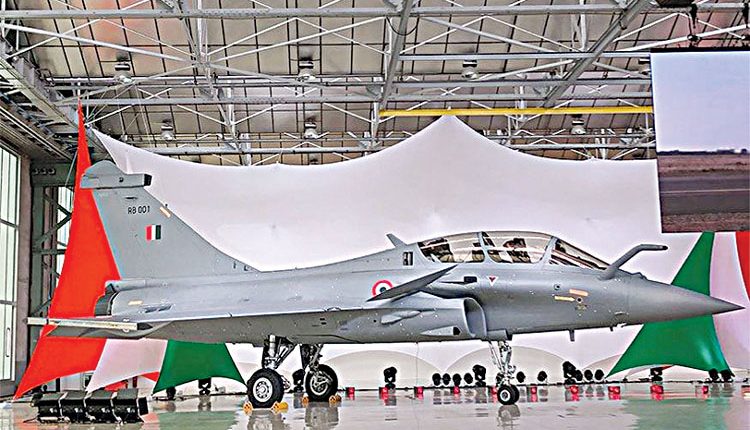 New Delhi, Jan 25 (Agency) At the Republic Day Parade on January 26, the newly inducted Rafale fighter jet will culminate the flypast by carrying out the ‘Vertical Charlie’ formation, marking the first time when the aircraft will be on display in India. In the ‘Vertical Charlie’ formation, the aircraft flies at a low altitude, then pulls up vertically to perform rolls before stabilising at a higher altitude. It will be a single Rafale aircraft performing this formation and culminating the flypast which will include a total of 38 IAF aircraft and four planes of the Indian Army.

Here’s all you need to know about the Rafale fighter jet:
The Dassault-Made 4.5-gen multi-role fighter jet ‘Rafale’ was formally inducted in the Indian Air Force at the Ambala Airbase last year. India had received the first batch of five fighter jets as the jets flew from France to reach the Ambala airbase following a two-day journey over multiple countries. The Rafale was escorted by Sukhoi Su-30MKI inside the Indian airspace. The fighter jet was inducted in the presence of Minister of the Armed Forces of France Florence Parly and Defence Minister of India Rajnath Singh. The induction is seen as a major boost to India’s air power and strategic edge over our two neighbouring countries on eastern and western borders. The Ambala airbase is well within the reach of both the borders.

Importance of Rafale:
After the Indian Air Force struck a Jaish-e-Mohammed camp in Balakot in February last year, Prime Minister Modi said, “Rafale fighters could have delivered even better results”. His reference was apparently to the stealth of Rafale, an air-dominance aircraft manufactured by French aircraft manufacturer Dassault Aviation. Since India was waiting for deliveries of Rafale when the attacks happened, the Indian Air Force deployed a dozen Mirage-2000 aircraft, made by the same company to hit the targets. Rafale is a Medium Multi-Role Combat Aircraft (MMRCA) that is said to boost India’s air dominance exponentially, currently safeguarded by fighter jets like Russia made Sukhoi Su-30MKI and MiG 29, along with French Mirage-2000 and indigenously built HAL Tejas.

India and Rafale Deal:
Though the idea to induct additional fighter jets in the IAF has been since 2001, the actual process began in 2007. The current IAF fleet largely consists of heavy and light-weight combat aircraft. So the defence ministry considered bringing in intermediate medium-weight fighter jets. The Defence Acquisition Council, headed by then Defence Minister AK Antony, approved the ‘Request For Proposal’ to buy 126 aircraft in August 2007. This kick-started the bidding process. The plan included acquiring 126 aircraft, 18 of them in fly-away condition and the rest to be made in India at the Hindustan Aeronautics facility under transfer of technology.

Specifications:
The Rafale is a modern fighter jet known for its agility, speed, weapon holding capacity and attack capability. The Dassault Rafale has a delta wing design and is capable of g-forces as high as 11g (in case of emergency). The Rafale is available in both single and dual seating cabin (India ordered 28 single and 8 dual seater Rafale). The Rafale is 15.27 metre long and a wingspan of 10.80 metre. The empty weight of Rafale ranges from 9900 kg to 10600 kg depending on the variant and maximum take-off weight of 24500 kg.

The Rafale is powered by two SNECMA M88 engines, each capable of providing up to 50 kilonewtons (11,000 pounds-force) of dry thrust and 75 kN (17,000 pounds-force) with afterburners. The engines push the Rafale to attain a high speed of 1.8 Mach (1912 kmph) and a range of more than 3700 km with 3 drop tanks. The Rafale jets will come with various India-specific modifications, including Israeli helmet-mounted displays, radar warning receivers, low band jammers, 10-hour flight data recording, infra red search and tracking systems among others.

Over four lakh corona infections recorded worldwide in past 24 hrs