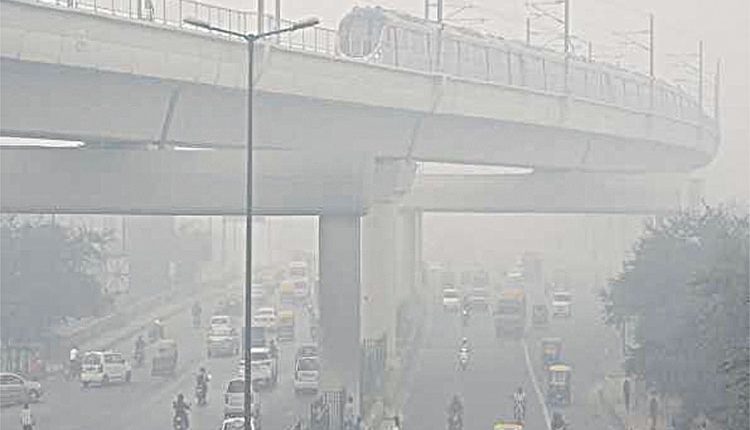 New Delhi, Dec 11 (FN Bureau) Winters in Northern India are typically characterized by a deterioration in the air quality. Polluted air is known to cause inflammation in our respiratory system bringing down both immunity of the lungs and our general immunity as well. Is there a direct relation between Covid-19 and air quality? Chairman of PSRI Institute of Pulmonary, Critical Care & Sleep Medicine Dr G C Khilnani while speaking at a webinar “Impact of COVID-19 during Winter & Air Pollution” on Thursday explained that deteriorating air quality leads to more cases and increased severerity of the disease.

“In Delhi we saw during the period around Diwali there were a shortage of beds in ICU’s, around 8000 cases were being recorded everyday. During this peak pollution time PM 2.5 rises and pm 2.5 is being suspected of being a carrier of the coronavirus.” Dr Khilnani while speaking at the webinar organised by ASSOCHAM pointed out studies and daughter from around the world to drive home the point that poor air quality enhances the chances of covid-19 “In northern Italy the mortality rate among elderly covid patients was between 15 to 20% while in Southern Italy where air quality is much better, the mortality rate among the elderly Covid patients was 4 to 5%. A Harvard University study which observed 300 counties in the US noted that a one microgram increase in PM 2.5 led to a 8% rise in the mortality rate. A German study said that areas with high levels of NO2 registered significantly higher rates of mortality.” It is a common fear that those suffering from pulmonary problems are even more vulnerable to the virus, however Dr Khilnani re assured that Asthma patients don’t have any added vulnerability to Covid-19, but he advised patients of Chronic Obstructive Pulmonary Disease(COPD) to be extra vigilant.

“Asthma patients who are on inhaled steroids must not discontinue using these, it has been observed that many patients stop using these as they suspect it would decrease their immunity. Patients of COPD need to take added precautions to safeguard themselves from the virus. As the chances of them becoming serious and death rate among COPD is higher than others. The New England Journal has documented that the fatality rate due to Covid among them is 6 to 7% higher than others.” During the winter months when air quality in the cities is far from being healthy exercising during the mornings is avoidable. Chief of Medical Quality, Artemis Hospitals Dr. Jeetendra Sharma cautioned against exercising early in the morning “Lesser the temperature higher would be the amount of PM 2.5 suspended in the air, as per international standards PM 2.5 should be around 12, in Delhi, during the afternoons it around 200, by the evening it may rise to somewhere around 350 and early morning it is at its highest around 400. So if we are doing rigorous exercises especially breathing or aerobic exercises early in the morning then we are inviting these particulate matter into our system; that is why it is advised that it is better to exercise once the sun is out as the air quality improves.”

Dr Khilnani also agreed that excersising in the mornings may not be a very good idea “when you exercise you take almost five times more air into your lungs than usual, also when you run invariably you start breathing from your mouth which means you bypass your nasal filter. Now the WHO has suggested that the benefits of exercise is much more than the harmful effects of air pollution, I however have countered them, my point is that the developed countries get alarmed when the 2.5 pm reaches 40, we here in India often find ourselves living in in PM 2.5 being around 350, so the same recommendation cannot be given for all the countries.” Principal Director & Head, Institute of Respiratory, Critical Care and Sleep Medicine, Max Hospital, New Delhi Dr Vivek Nangia during his talk explained that there is no escape from particulate matter and harmful gases “particulate matter(PM)is of various sizes starting from .1 Micron to 10 Micron. Particulate matter size of 10 Micron gets easily filtered at the nasal level, 5 microns gets filtered around the throat level, particles smaller than that cannot be filtered it goes directly into the lungs particulate matter less than 1 Micron goes directly into the bloodstream. Gases like carbon monoxide, nitrous oxide and ozone also go directly into the lungs. Irrespective of what mask you are wearing lead and ammonia also go directly into the lungs and cannot be stopped by a mask. N95 mask can filter out upto 3 microns of particulate matter not less than that and unfortunately it does not filter out the gases.”

France to replace Corona lockdown with curfew starting next week