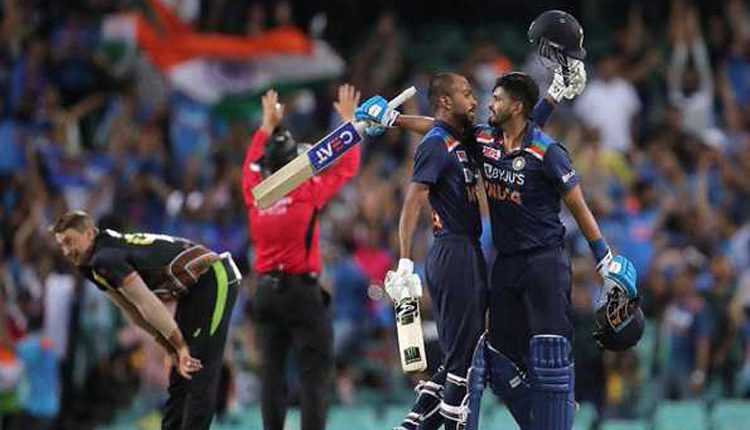 Sydney, Dec 6 (FN Bureau) Shikhar Dhawan brilliant 52 and Hardik Pandya quickfire not out 42 off 22 helped Team India on Sunday defeated Australia in the second T20I of the series thus extending their winning streak in T20Is to 10 games, which helped them broke Pakistan’s big T20I record.

After winning the second T20I by six wickets and taking the unassailable 2-0 lead in the three-match series against Australia, India skipper Virat Kohli said it was an ‘amazing game of cricket’ and lauded his teammates for their contribution in the match. Hardik Pandya and Shreyas Iyer chased down 37 runs from the final three overs to put the visitors over the line. Shikhar Dhawan and Kohli also got among the runs as India chased down the total of 195 with six wickets in hand and two balls to spare. Taking to Twitter Kohli wrote, “Amazing game of cricket. Well done boys.” Former India legendary batsman Sachin Tendulkar hailed Men in Blue’s comprehensive performance in the shortest format series so far. Pandya was awarded Player of the Match for his match-winning knock of 42 off 22 balls and he dedicated this victory to the countrymen.

Batting first, Australia once again piled on the misery on Indian bowlers and the side posted a total of 194 owing to knocks of 58 and 46 from Matthew Wade and Steve Smith. No Indian bowler apart from T Natarajan was able to leave his mark in the match and dropping catches did not help the visitor’s cause. India did manage to remain on track throughout the whole chase as Shikhar Dhawan and Kohli played knocks of 52 and 40 respectively. Indian skipper Virat Kohli joked after his team’s thrilling win over Australia in the 2nd T20I that he’ll ask AB de Villiers for his thoughts on an innovative shot the former played. In the 15th over of the Indian innings bowled by Andrew Tye, the 32-year-old got down on one knee and scooped a full delivery over the fine-leg boundary for six. Virat Kohli doesn’t often resort to the shot, which his Royal Challengers Bangalore teammate De Villiers plays better than anyone else in the world. In the final overs, Hardik (42) and Shreyas (12) managed to hit big shots to take Men in Blue over the line. The final white-ball game of India’s tour of Australia will be played at the same venue of Tuesday (8 December), and the Men in Blue might opt to rest a few key players ahead of the Border-Gavaskar Trophy. Interestingly, a full crowd is expected to be allowed at the SCG for the game.

It’s a great feeling to play against ‘high-quality’ players in ISL: Akash