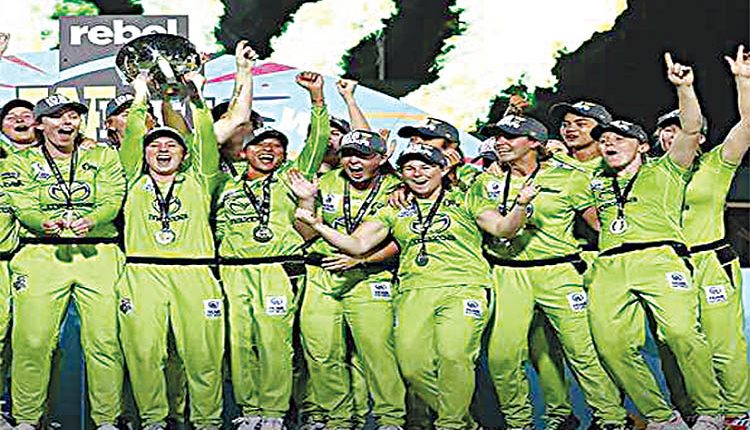 Sydney, Nov 29 (Agency) The Sydney Thunder claimed their second Women’s Big Bash League (WBBL) title in stunning fashion, after thrashing Melbourne Stars by seven wickets in the final at North Sydney Oval, here on Saturday. Thunder’s in-form bowling attack restricted the Stars to paltry 86/9 in 20 overs. In reply, the Thunder chased the target in 13.4 overs to become the joint-most successful team in the league alongside the Sydney Sixers and the Brisbane Heat.

Thunder had earlier won the inaugural edition of the WBBL in the 2015-16 season. Earlier, Stars captain Meg Lanning won the toss and curiously elected to bat for the first time all season. The decision immediately looked a gift for the Thunder as pacers Shabnim Ismail (2-12) and Sammy-Jo Johnson (2-11) left the Stars’ strong top-order in tatters with a stunning display in the powerplay. The opening partnership was broken by Ismail as she dismissed Ellyse Villani (1 off 11) . Stars lost their 2nd wicket in the form of Mignon du Preez (4 off 10) sent packing by Johnson as they managed to score only 20/2 runs at the end of the Powerplay. Haynes went back to Ismail and Johnson, who remained relentless as they piled the pressure on Stars captain Meg Lanning. Ismail in her 4th and final over and got rid of Lanning who scored 13 from 15 balls. After that, there was no looking back for Syndey Thunder who crushed the batting lineup of the Stars Stars to restrict them to 86/9 at the end of 20 overs, the lowest total ever in a WBBL final.

For Stars, English all-rounder Katherine Brunt was the top-scorer as she played an unbeaten inning of 22 runs. Chasing a small target of 87, Sydney Thunder openers Tammy Beaumont and Rachel Trenaman batted cautiously in the start. Brunt ignited some hopes for Melbourne when she trapped Beaumont lbw for 16 in the 5th over. However, Beaumont’s opening partner Rachel Trenaman made batting look far simpler than it had earlier in the evening, finding the boundary five times. Tess Flintoff ended Trenaman’s 26-ball innings on 23, and Johnson (1) was bowled by King without inflicting major damage, leaving the Thunder 3-54. But with just 33 runs required, the cool heads of Heather Knight (26* off 19) and captain Rachael Haynes (21* off 17) formed an unbeaten 4th-wicket stand of 33 runs off just 23 balls to help Syndey Thunder win by 7-wickets against Melbourne Stars in the final.