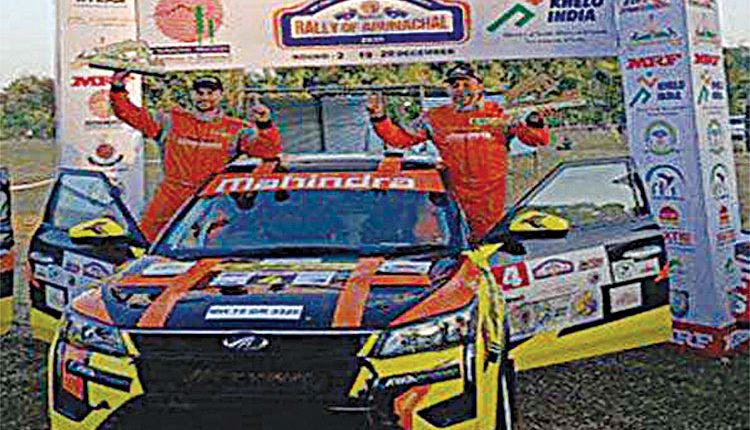 Itanagar, Dec 20 (Agency) Three-time APRC champion Gaurav Gill proved to be the king of the mountains once again, winning Round 2 of the Champions Yacht Club FMSCI Indian National Rally Championship, the Rally of Arunachal, here on Sunday evening. Chaperoned by his trusted navigator Must Sherif, the Arjuna Awardee ruled each of the eight Special Stages over the weekend, to make it a grand double for JK Tyre supported drivers in two back-to-back rounds over four action-packed days.

Gill’s teammates too emerged with flying colours, with Amittrajit Ghosh (co-driver Ashwin Naik) following him home in the overall INRC class while Dean Mascarenhas claimed the INRC 2 title; Fabid Ahmer and Maninder Singh Prince finished second and third in INRC 3 to make it a near sweep. “It feels good to be rallying again. With the COVID 19 situation and then Mahindra pulling out, it was a tricky situation for us. But with JK Tyre’s support and Mahindra offering us their XUV300, things soon fell in place for us,” Amittrajit said. “It was a great round for me because after a long time I made it to the podium,” he pointed out. Former INRC champion Karna Kadur, backed by MRF, too underscored his mettle, cruising to the third position in the overall elite class. He had finished second in Round 1 two days earlier with Nikhil Pai. Defending INRC champion Chetan Shivram (with Rupesh Kholay) of Yokohama Tyres, who had a DNF in the last round, started the round with a stock engine car and still managed to finish overall 13th to take valuable leg points. Following Dean Mascarenhas in INRC 2 was Snap Racing’s Sahil Khanna (and Vidit Jain) and Rahul Kanthraj (along with co-driver Vivek Y Bhat).