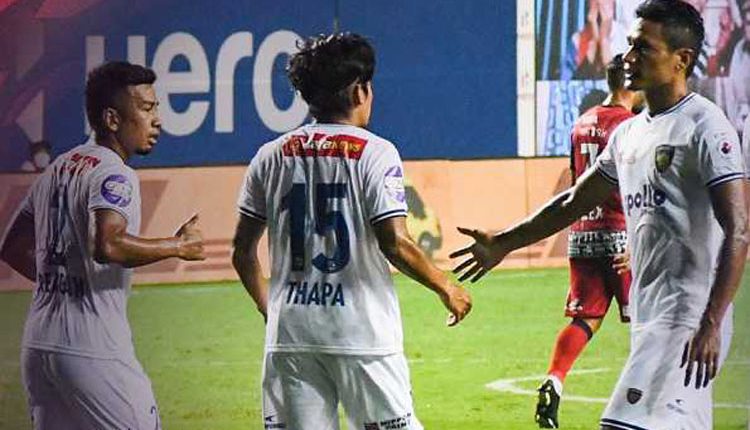 Vasco (Goa), Nov 25 (Representative) Chennaiyin FC began their 2020-21 Hero Indian Super League (Hero ISL) campaign with a 2-1 victory over Jamshedpur FC at the Tilak Maidan Stadium here last night. Hero of the Match Anirudh Thapa opened the scoring for Chennaiyin just a minute into the game and the India international was praised by his head coach Csaba Laszlo during the post-match press conference.

“[Anirudh] Thapa has always been an important part of our team. He definitely showed that he can be a very good player here in India. He deserved to score today. I am a little disappointed that (Lallianzuala) Chhangte couldn’t score but I hope he will score in the next game,” Laszlo said. Chennaiyin FC were the better side for most of the match and the Marina Machans did enough to hold onto their lead despite a goal by their former player Nerijus Valskis. Laszlo, in fact, felt that his side had enough chances to put the game beyond Jamshedpur’s reach in the first half itself. “In the first half, we should have closed the game. Chhangte and Isma (Esmael Goncalves) had chances after we went two goals up. In the second half, we knew that the opponents will come out and press hard, but we had to find the spaces for counter-attack. But at the end of the day we did a good job,” he said.

The 56-year-old head coach went on to admit that he’s glad to have secured all three points. “For me, to get three points is important because every team will fight for the points. We have a very difficult season and the team with lesser injuries can get the three points more easily. To get the three points, we have to fight, show the desire and play like a team,” Laszlo explained. Meanwhile, Jamshedpur FC head coach Owen Coyle also showered praise on the first Indian goal-scorer of Hero ISL 2020-21. While speaking at the post-match press conference, Coyle said, “Thapa is a wonderful player. He was the best Indian midfielder in the league last season, and I have not seen anything to change my mind yet. I kept encouraging him to get forward as well. He is a wonderful player and a really good lad.” While sharing his thoughts on the game, Coyle appreciated the desire shown by his side after going behind in the match. “We started slowly but after the second goal we showed a lot of heart and spirit. (Nerijus)
Valskis scored a wonderful goal. We know that if we give him that kind of supply, he will score the goals… there was a lot of endeavour, but we are disappointed not to get anything from the game. We will pick ourselves up and be ready for the next match,” Coyle shared.