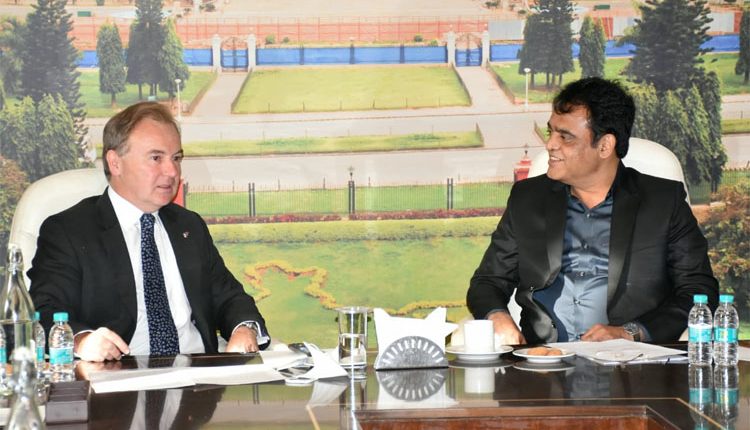 Bengaluru, Nov 20 (Agency) UK Deputy High Commissioner Jan Thompson lauded the Karnataka government’s effort to become a leading state in tackling climate change and rapid adoption of green energy. Speaking at the ongoing Bengaluru Tech Summit 2020, he said that it is interesting to note that Karnataka is leading the green initiative in India with more EVs on the road, more charging stations and moving towards green energy. “We have initiated more partnerships with the Karnataka government, especially for electric vehicle ecosystem building and also reducing pollution. We’re also doing a green fund for more investment in the tech startup in climate change and green energy”, she added. Jan Thompson also lauded the city-level partnership with Bengaluru for its Clean Air Testbed Drive initiative on Church Street to reduce pollution. “We don’t have to scale up to green-tech, but at an industrial level, but at an individual level too and a cleaner development path. Green-tech also helps us have a sustainable and prosperous future”, she said.

Commenting on the UK’s initiative, she said during fiscal 2020 the country has halved emission and made sense economically. Besides planning to hold the UN Climate Change Conference in 2026, she also highlighted the UK’s continuing action and cooperation with India. Speaking at a panel discussion, Karnataka Deputy Chief Minister C N Ashwathnarayan said Karnataka is recognized as the ‘Startup Capital’ and ‘Innovation Capital’ of the nation and the home of the Silicon Valley of India, Bengaluru. “Karnataka is the undisputed leader in the country in sectors such as Information Technology, Machine Tools, Aerospace, Biotechnology, Electric Vehicles, and Electronics. I am delighted to say that Karnataka has also launched a number of initiatives aimed at promoting and increasing the use of green technology, ” he added. The Minister highlighted the fact that Karnataka was the first state in India to introduce an electric vehicle policy to a battery-run green vehicle. “The state is aiming for 100 per cent electric mobility in certain vehicle segments. Our capital city, Bengaluru, is home to e-mobility startups like AtherEnergy, SUN Mobility, NDS Eco Motors, Yulu and Mahindra Electric.” He said that Pavagada Solar Park, developed in the Tumkur district is the largest solar park in the world and aims to shift its focus from conventional power resources to eco-friendly energy resources.

“The UK is one of our most important GIA partners, and we are indeed delighted to see our relationship strengthening over the years. The UK has been known for its startup and innovation strengths and achievements in Artificial Intelligence, Fintech, Regulatory Sandbox and Creative Tech among others. Karnataka and the UK will continue to work together to strengthen and grow our partnership”, he added. “Creative Tech, Data Science and AI and Regulatory Sandboxes will be the UK counterparts for Karnataka to work together for a few areas. I would like a successful session for the UK and looking forward to further strengthening our partnerships,” he added. UK Minister of State, Foreign, Commonwealth and Development Office Lord Tariq Ahmad said, the impact of the global recovery on economies of scale is Covid-19, and this is the time to look to the future. “We must take the opportunity and build back to create a world that is green, clean and sustainable. COP26 at the Global Action Plan to Mobilize India is the lead by example for both of us,” said Lord Tariq Ahmad of Wimbledon. Speaking at the debate, Deputy High Commissioner Karnataka & Kerala Jeremy Pilmore-Bedford said the application of green technology is at the heart of the UK’s ambition to build back from the current Covid crisis. “The UK and India will be key to addressing climate change issues and safeguarding the future of the planet,” said Jeremy Pilmore-Bedford.

G20 Summit to focus on sustainable recovery from Covid-19