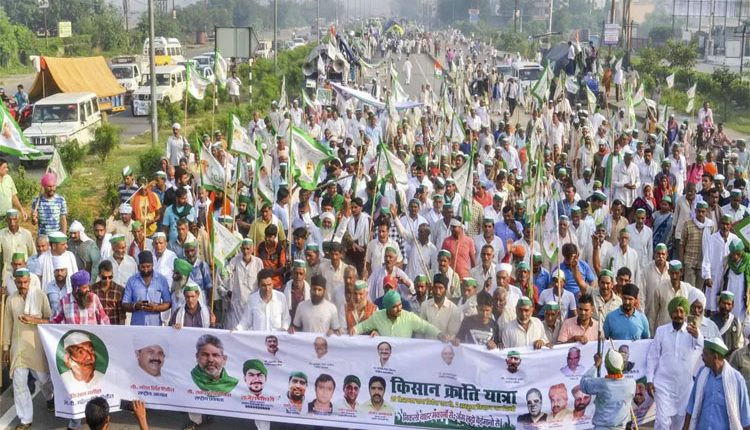 Lucknow, Dec 4 (Representative)The principal opposition in Uttar Pradesh, Samajwadi Party will kickstart ‘Kisan Yatra’ in all the districts of the state from Monday in solidarity with the ongoing farmers’ protests against the Centre’s contentious farm laws. The Kisan Yatra was announced by SP chief and former UP Chief Minister Akhilesh Yadav here on Thursday.

The party workers are set to join the Yatra on their bicycles, motorcycles and even on foot across the state with the demand of doubling the income of the farmers. Meanwhile, Mr Yadav has alleged that the farmers have received the minimum support price of neither wheat nor paddy. “The income of the farmers have also not doubled. The government purchasing centers have fallen victim to BJP’s bad policies. The BJP suppresses the voice of the farmers with sticks, bullets, tear gas and water splashes,” he said, appealing the SP workers and the general public to join them in farmers’ struggle. “In this struggle against agricultural laws, we will not allow the lack of flour, pulses and rice for our farmer brothers. We appeal to the SP workers and the general public to come out and extend helping hands to our farmers. There is a special request from the doctors to take care of the elderly farmers,”Mr Yadav said in a statement on Friday. Farmers continued their agitation at the Delhi border for the ninth day on Friday as talks of multiple rounds with the government failed to yield any positive results. Meanwhile, the truck driver’s union has threatened to go on strike to protest in favour of the farmers.

NEP will prove to be a game changer: Dr Pokhriyal