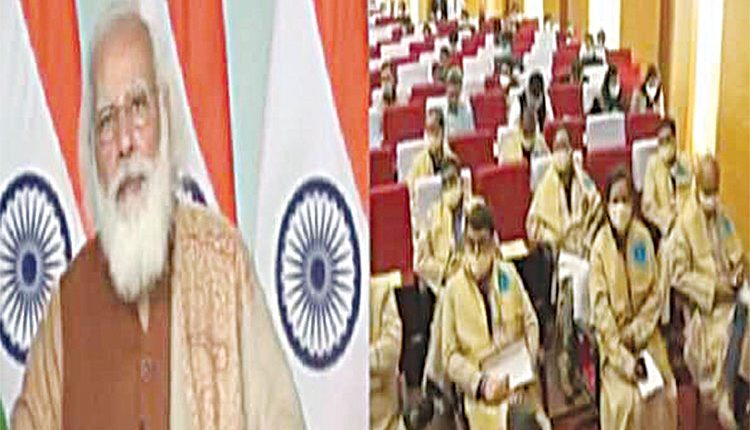 Guwahati, Jan 22 (FN Bureau) Prime Minister Narendra Modi today said that students need to take inspiration from the Indian cricket team who despite being inexperienced and injured won against Australia one of the strongest team in the world. Addressing students and faculty at the 18th convocation of Tezpur University in Assam in a virtual conference, Mr Modi said the young team was inexperienced and injured, but that didn’t deter their determination and beat one of the best teams in the world.
A total of 1,218 students received their degrees and diplomas in the convocation. “The universities of the future will be entirely virtual and students from any part of the world would be able to study anywhere at anytime,” Mr Modi said. Delving deep, Mr Modi said that the NEP focuses on data and analytics.

It has the power to improve the admission, teaching, and evaluation system. “During the freedom struggle, many brave hearts from Assam have given their lives now you have to live for the AtmaNirbhar Bharat,” Mr Modi told graduating students asking them to spread the light of Tezpur University across the nation and the world. In this COVID era, the AtmaNirbhar Bharat programme has become a nomenclature in our dictionary but we need to understand what is this change brought by the initiative, said Modi. The biggest change is of perspective – the attitude of the entire nation has changed, said Modi. Union Education Minister Ramesh Pokhriyal ‘Nishank’, Assam Chief Minister Sarbananda Sonowal, and Tezpur Lok Sabha MP Pallab Lochan Das also attended the convocation.

All types of music should exist in movies: Music maestros