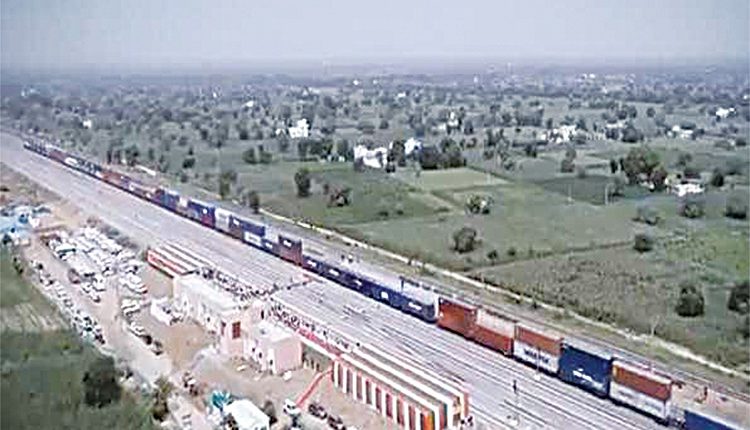 New Delhi, Dec 10 (Agency) Indian Railways’ Eastern Dedicated Freight Corridor (DFC) between Kanpur to Khurja in Uttar Pradesh has started operational testing of goods trains in the 353-km section from Thursday. Sources in DFC Corporation of India told that a freight train carrying coal for the Nabha Thermal Power Project near Sangrur, Punjab, arrived at Bhaupur station in Kanpur on DFC’s line from the Indian Railways’ line at 1000 hrs and will return to Khurja on the same line.

According to sources, it has come for the first freight train test operation on Bhaupur-Khurja section of Eastern DFC. Soon this line will be opened for cargo transportation. According to sources, on completion of the DFC under construction from Ludhiana to Sonnagar, coal- laden goods trains will reach Nabha directly from DFC itself. At present, it takes 22 to 26 hours for the goods trains to reach from Sonnagar to Nabha, but after the DFC is formed, this time will be cut down to 10 to 12 hours. The freight train will run at speeds up to 100 km an hour on the DFC. The work of 2,800-route-km of Eastern DFC (excluding Sonnagar-Dankuni PPP section) and Western DFC will be completed by June 2022. Railway Board Chairman and Chief Executive Officer (CEO) Vinod Kumar Yadav recently told reporters here that a 353-km stretch from Bhaupur to Khurja in Kanpur in the eastern DFC and a 335-km stretch from Rewari to Madar on the Western DFC will be completed in December. Work on the Madar Palanpur section will be completed by March 2021, Khurja to Dadri section by June 2021 and Rewari to Dadri section by December 2021.

Thus, direct connectivity of DFC from Kanpur to Palanpur will be operational by December 2021. While three ports of Gujarat-Kandla, Pipavav and Mundra from Palanpur are already connected. In this way, all three ports of Gujarat from Kanpur will be directly connected to DFC. Mr Yadav described it as “a game changer” for the industrial development of Uttar Pradesh as well as for the Indian economy. This will increase both the speed and frequency of passenger trains on Delhi-Mumbai and Delhi to Howrah route. The main objectives of the construction of DFC is to reduce traffic congestion in the current Indian railway network, increase the average speed of goods trains from the current 25 to 70 km per hour, heavy haul (1.5 km) train with a total load of 13,000 tonnes (25/32.5 tonne excess axle load) and to facilitate the operation of double stack container trains. This will connect the existing ports and industrial areas for rapid movement of goods, create efficient energy and environment friendly rail transport system as per global standards, increase the share of Railways in the current freight transport from 30 per cent to 45 per cent and lower the logistics cost of transportation.

Tribals deprived of access to benefits of tech and health services: Vardhan