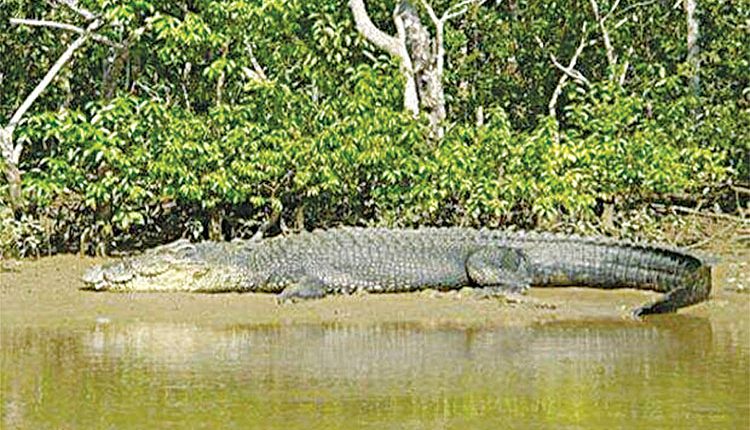 Kendrapara, May 27 (FN Representative) The Severe Cyclonic storm “Yaas” has left a trail of devastation at Bhitarkanika National park. Rajnagar Mangrove and Wildlife division DFO Bikash Ranjan Dash said two spotted deer died in the cyclone. While one died when a portion of the wall of the Dangamal Crocodile Research centre caved on it another died after a tree fell on it. Mr Dash said roofs of several thatched cottages, doors and windows of tourist cottages , water pipes and a portion of concrete jetty were damaged at Habalikhati.

The favourite nesting place of Olive ridley sea turtles,Nasi -2 , the world’s largest rookery of Olive ridley sea turtle, is now submerged under tidal water. Mr Dash said the wildlife museum of Bhitarkanika National park, located within Dangamala crocodile scheme, also damaged in the cyclonic storm after big trees fell on the asbestos roof of the museum. The eco-tourism cottages at Ekakula and Habalikhati at the sea coast within Gahirmatha Marine Sanctuary under Rajnagar forest Range were also damaged. The Cyclonic storm has damaged the forest rest shed thatched roofs at Ekakula whereas Several thatched cottages ,set up to promote eco-tourism have also been damaged. The DFO said the forest department is planning to undertake the repair work during the period when the tourists are banned from May 1 to July 31 for smooth breeding and nesting of crocodiles.

750 babies born as Cyclone Yaas wreaks havoc in coastal Odisha on May 26
Official sources here today said in view of the very severe cyclonic storm Yaas, the Women and Child Development and the Mission Shakti department had identified and shifted as many as 4555 pregnant women who are expected to give birth in the first week of June from the vulnerable areas to hospitals. As many as 750 women of the 2107 delivered during the cyclone. The highest number of 166 babies were born in Kendrapara, followed by Bhadrak (98),Khordha (95), Jagatsinghpur (84) Jajpur (69), Keonjhar (55), Mayurbhanja (36) and Puri (28). Her family members expressed their joy and thanked the officials for their move.