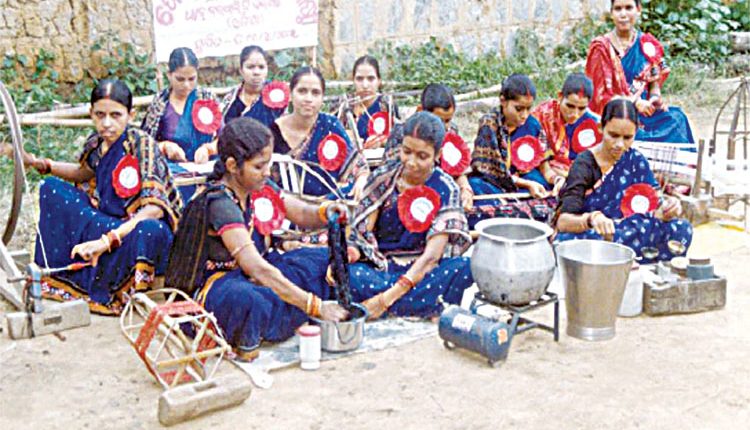 Indian culture as well as tradition respectswomen as ‘Shakti’, the source of power. Sheserves being the form of Mother, Sister, Wifeand Daughter. Days have passed. Now she isfree of every burden and has proved herselfquite capable. After the successful political roleof women in Panchayati Raj system, for whichLate Biju Babu deserves all the credit, nowthey have provedtheir excellence ineconomic sectorbeing a part offamily’s incomesource throughMission Shakti. Groups constituted under MissionShakti are basically non-formal organizations. Inorder to get rid offinancial crunch, thisidea was conceived in the mind of the poorpeople. They assembled themselves and initiatesuch effort. 36,000 WSHGs were there in theState prior to the launching of ‘Mission Shakti’.Banking organizations, Co-operative Banks, Private Banking sectors, N.G.Os and both theUnion and State Governments extend a helping hand. Where Banking organizations were reluctant to sanction individual loans apprehending the uncertainty in repayment there they cheerfully grant group loans and alsodouble the loan amount. Group loans generallygrow with small business, agriculture and consumer loan including repayment of the previous loan from the private money lenders (Sahukar) and for medical treatment etc. Most of the people, who were below poverty line, now by this way, have been excludedfrom the B.P.L list. The definition of theword ‘poor’ impactsin a certain directiveto their mentality and they try to comeout of the said depressive word with self-confidence.According to CARE India and SIDBI, thereare over 16 lakh Self Help Groups throughout the country. An amount of over Rs. 6500 crore has been sanctioned towards these S.H.Gs. Theaforesaid statements were expressed by the said Organisations in the year 2005.

Orissa, among the eastern States, occupies a distinct place information of record number of Women Self Help Groups. The Scheme ‘Mission Shakti’ waslaunched in Orissa on 8th March, 2001 on International Women Day. A target was fixed for at least one lakh S.H.Gs by the end of theyear 2005. But in fact, 1,49,233 WSHGs were formed with 1878985 members by the end of February 2005. Latest on Govt. papers reveals that 1,93,652 S.H.Gs with 24,57,555 nos. of members and saving of an amount of Rs.18292.62 lakhs are in total by the end ofMay 2006. But the Bank report says that till date, 2,40,000 S.H.Gs are planning their way of life throughout the State. Women Self Help Groups are actively performing the role of reorganizing the village as well as the country.
Saving of an amount nearing Rs. 200 crore has been possible through Women S.H.Gs where as more than Rs. 55462.18 lakhs haveal ready been sanctioned as loan assistance towards 2,22,142 A/c holders by the end of March-2006. The Units run by S.H.Gs are in Cattle rearing, Goat farm, Poultry, Beekeeping, Horticulture, Tissue culture, Flori-culture, Pisci-culture, Vegetable and Mushroom cultivation, Sewing, Handicrafts, Making of soft toys, Cottage industries’ products handicrafts, Pickle and Spice production etc. S.H.Gs. are also carrying outlabor-intensive Programmes.

Selling of control kerosene and L.P.G has also been handed overto these S.H.Gs. The State Government hasdirected to the Health and Urban Development Department for purchasing phenyl and pesticides prepared by the S.H.Gs. 1080 S.H.G candidates have been imparted with Computer Training. During natural calamity, S.H.Gs are being engaged in relief and restoration works. Panchayati Raj and Horticulture Departments are also one step ahead in providing special loan assistance to some selected S.H.Gs. A Programme named ‘Trupti’ is being implemented including the S.H.Gs in 36 Blocks of 9 districts i.e. Balasore, Bhadrak, Jajpur, Kendrapara, Jagatsinghpur, Puri, Nayagarh, Khurda and Angul in first phase under Orissa Poverty Alleviation Mission. TheState Government has also requested D.F.I.D to include Mayurbhanj, Keonjhar, Sundargarh and Sambalpur districts in this Scheme. For about 500 industrial entrepreneurs in eachBlock has been conceptualized. They will beprovided with an amount of Rs.1 lakh eachout of which 50% is grant-in-aid and rest 50% has to collect by these S.H.Gs. Women onceengaged only in house hold work are now generating income for their family. By the help of the S.H.Gs, women in village are discussing themselves regarding the day-to-day development in social, political, economical, cultural and spiritual fields. They also discuss their personal and family problems and find away for solution to their impediments through S.H.Gs. Participating in the process of development and welfare of their village they successfully perform their role. In Adivasi populated areas, the S.H.Gs are fighting against illiteracy, poverty, superstitions and sale and distillation of spurious country liquor. They also create public awareness regarding the eventuality bursts out of drinking wine or usingother excise-goods. People can escape their problems by helping each other. It does mean not only to the fiscal but also to every aspect of life. The moral power of women representatives in Panchayati Raj system becomes strong and decisive owing to these S.H.Gs as they certainly create congenial atmosphere for Co-operative movement as wellas social reforms. The ‘zoolum’ of the ‘Sahukar’ lessens by this way. Programmes and preparations undertaken by the Government for proper health-service towards women andchildren are successfully being implemented; infant mortality rate has been reduced and “care of the pregnant one helps in bringing out ahealthy child” is well taught in the areas where S.H.Gs are active.

A statistics reveals that over 24 lakh families have been included in this economic movement. They are making efforts for betterment of their living standard through 244 income-generating Programmes. Observing the unexpected success in the State, the jubilant State Government has decided for sanctioning another loan assistance of Rs. 343 crorestowards 1,47,951 S.H.Gs. A target for 2 lakh Women S.H.Gs by 2008 was fixed. But the above-mentioned figure i.e. 2,40,000 S.H.G shave already been possible by the end of July 2006 clears that the Mission is success beyond target.

High-level discussions and field-level workshops are being held regularly forchalking out strategy for marketing facility. Exhibition-cum-sale is also being organized thrice in a calendar year at Delhi, Mumbai including 9 places of the State. Besides, Sales Centers are also there in Bhubaneswar Ekamra Hat. Emphasis has been laid on selling of the products by the Self Help Groups. Considering into all bearings, necessary training is being imparted in phase wise and over 20,000 Women Self Help Groups have been imparted with training so far. There is no problem forthe Banking Organisations as 95 % of the loan amount is being collected timely. Really it isan investment at grass root level.Recently it is learnt that, 25 % of theS.H.Gs lacking managerial skill and requisite knowledge as well as art to successfully runthe institution are being extended with necessary helps by the Government. Role of a woman is there in every man’s success. Village women help their family being an active member of S.H.Gs. They discuss various problems pertaining to the progress of their village. Self-confidence in women increases and gender biases operating against them decreases. It is said that our country lives in village as70 % of the total population of the country reside in rural community. If we make the village socially, politically, economically, culturally and spiritually sound, the fortune ofthe country would be like-wise. And the Indian culture will certainly be able in creating acongenial atmosphere for ‘Basudhaiba Kutumbakam’; the whole world is a family ,basing upon the truth that the Omnipotental ways act for peace, progress and prosperityfor the whole mankind, His best creation onthis planet.

Embrancement of Univariety for Career Counselling during COVID