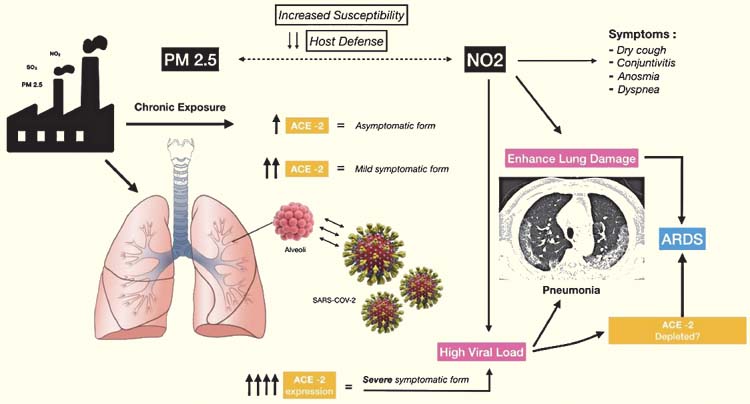 Delhi, the capital of India, has long been one of the most polluted cities in the world. Environmentalists say that the air in Delhi has become heavier with dust and other metals due to reduced rainfall due to climate change and dry weather for several days. Due to these reasons, Delhi is now repeatedly known as a city of air pollution. If there is no rain, such situation will continue in the coming days. The onset of the winter season has also made matters worse. As the city battles a deadly surge, authorities have said that the severe pollution levels have a role to play. A Lancet report said that air pollution levels accounted for a 13% rise in COVID cases. Indian Medical Authority (IMA) recently said that 1 in every 8 cases in Delhi is because of pollution.

How is COVID-19 related to spike in pollution levels?
Not only are rising pollution levels leaving people suffocated with symptoms similar to that of SARS-COV-2, but it also increases the risk for COVID. Globally, pollution has also been associated with a heightened risk of COVID-19 severity. If you thought the polluted air was only stifling the air you breath, think again. We tell you 5 ways the rising air pollution is making our COVID battle worse.

Pollution causes cellular damage: Air pollution does not only cause considerable deterioration of the vital organs but also damage on the cellular level. Breathing in high polluted air on a regular basis, or long term exposure can compromise cellular composition, which in turn lead to DNA mutations. Any level of cellular damage can cause organ damage and compromise the body’s immune response to root away pathogens and viral multiplication. Those with organ damage and compromised response are at a higher risk for COVID severity. Cellular damage, radiation from cancer treatments can also delay the production of infection-fighting white blood cells in the body.

Increases inflammation in the body: Studies over the years have suggested that air pollution can lead to endothelial damage, inflammation, which in turn can lead to clogged arteries and heightened cardiovascular risk. Hypertension, which is one factor which poses risk to cardio health is bad for COVID. Hypertensive patients tend to be low on some form of receptors in the body, known as ACE2, which coronavirus spike proteins interact with and attack the body. Chronic inflammation also brings on another health problem- obesity, which can further slow down the body’s metabolic response, bring on breathing difficulties and respiratory problems and prolong recovery timeline.

Spikes risk of developing co-morbidities: Pre-existing medical conditions, from diabetes, obesity to kidney damage are some of the biggest risk factors for COVID-19 infection and severity, with unmanaged blood sugar levels being the most harmful one. Co-morbidities can make people have frail immunity and harder to fight off viral load in the body.

Raises respiratory infection risk
Heightened asthma risk, development of other respiratory conditions like emphysema and chronic bronchitis, toxic pollution levels do a load of damage to our respiratory system. Particulate matter (PM2.5), soot and other germs can settle in chest and lung cavities and clog linings. This can increase the risk of respiratory and pulmonary complications. Pre-existing respiratory disorders and complications can put you at an increased risk for developing COVID related illnesses. Those with COPD like illnesses can also have a high hospital and mortality rate.

Social isolation can lead to higher risks of hypertension in older and middle-aged women, claims study
When it comes to our health, high blood pressure can pose severe threat to our heart and our overall physical condition. Besides the genetic factors, hypertension can be triggered by obesity, unhealthy diet, alcohol consumption, tobacco use and other things. However, recent study has also found a possible link between hypertension and social isolation. While this area of study is still at its primary stage, a major breakthrough suggests that middle aged and older women who were socially isolated or did not have any interactions with people were more likely to suffer from hypertension compared to men.

What is Social Isolation?
Social isolation is a phenomenon, where a person chooses to physically isolate or distance themselves from the rest of the world. As against the definition of loneliness, which is when people experience a feeling of being alone and alienated, social isolation is the very act of physical isolation. Social isolation, while it may seem like a concept and something that is harmless, can do unimaginable damage to our health. According to a study administered by the US National Institute on Aging (NIA), social isolation can lead to a myriad of health risks ranging from hypertension, obesity, anxiety, depression, weak immune system and even fatal conditions.

Turkey to vaccinate citizens against Corona for free

InkQuills Publishing House- An Evolutionary and Approachable Go-to Solution for…