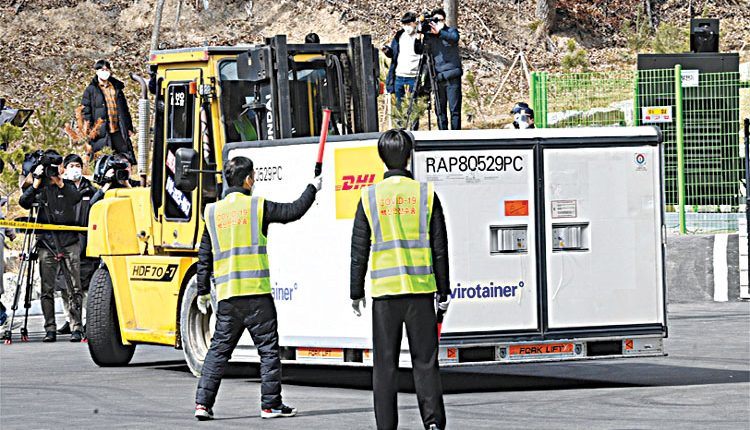 Moscow, Feb 26 (FN Agency) South Korea launched a mass inoculation campaign on Thursday with the AstraZeneca vaccine, as authorities hope to reach herd immunity by November, local media reported. The first group of people to receive the shot are over 289,000 healthcare workers and patients under 65 years old currently staying at long-term medical facilities, the Yonhap news agency stated. Reportedly, a person to get the first dose was not officially appointed. The shot was administered at a Seoul public health center to a 61-year-old nursing home employee.

According to the health authorities, the first vaccinations with the AstraZeneca vaccine will be completed in March. The first batch of the vaccine, manufactured at South Korea’s SK Bioscience company per the agreement with AstraZeneca, will be enough to give shots to 785,000 people. In the next four days, the vaccine will be distributed to 1,900 long-term care facilities and public health centers across the country.

Earlier in the day, the first shipment of Pfizer vaccines for 55,000 healthcare workers arrived in South Korea under the WHO-backed COVAX project. Vaccinations with Pfizer will start on Saturday at specially designated state-run facilities. The South Korean health authorities plan to get 70 percent of the population inoculated by September, and achieve herd immunity by November, the news agency said. So far, the government has already secured COVID-19 vaccines to inoculate 79 million people through various contacts and delivery mechanisms. Currently, the daily number of confirmed COVID-19 cases in South Korea is 400, while the total number since the start of the epidemic has reached 88,922.

DCB Bank to focus on tractor loans for the rural market