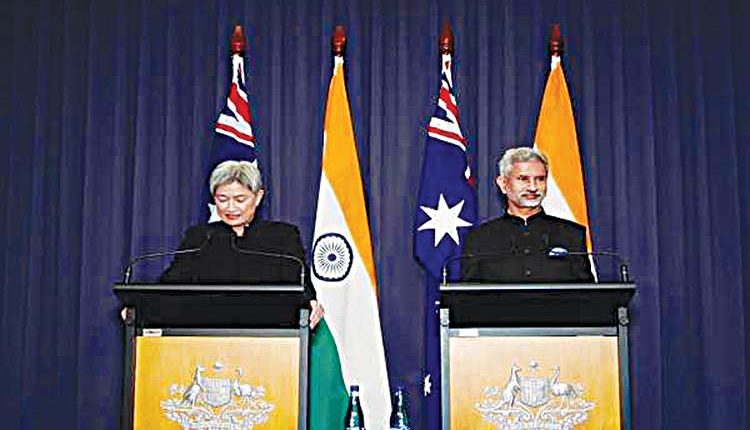 Canberra, Oct 10 (Agency) External Affairs Minister Dr S Jaishankar on Monday held broad ranging discussions with his Australian counterpart Penny Wong on the Ukraine conflict and its impact on the Indo-Pacific region.The two addressed a joint press conference as they held the 13th India-Australia Foreign Ministers’ Framework Dialogue here. “We have discussed Ukraine and its repercussions in the Indo Pacific region, the progress in Quad, G-20 issues, our trilateral, some things related to IAEA and climate finance sustainable development goals,” Dr Jaishankar said. Wong said India and Australia should resolve issues in the Indo-Pacific region together. “We spoke about a whole lot of issues — trade, economy, education, defence and security, clean energy and among the many agreements and understandings we reached.

It is in our mutual interest to expand the diplomatic footprint in each other’s country,” Jaishankar said.During the 13th Foreign Ministers Framework Dialogue, the two Ministers took stock of the steady progress of the Comprehensive Strategic Partnership, including important Ministerial visits in recent months and agreed to work closely together in Quad, trilaterals, G20, UN and other important forums. “India and Australia are comprehensive strategic partners. We are Quad partners. We partner in many other ways… We don’t want to see any country dominating and any country being dominated,” said Wong.Wong announced that Australia was looking to open a consulate general in Bengaluru “sometime next year. “The visit by Dr Jaishankar is his second to Australia this year. He came in February 2022 to attend the Quad Foreign Ministers’ meeting in Melbourne. Dr Jaishankar also met Australian Deputy Prime Minister and Defence Minister Richard Marles. “Exchanged views on regional and global security. Our growing defence and security cooperation ensures a peaceful, prosperous and rules based Indo-Pacific,” he tweeted.