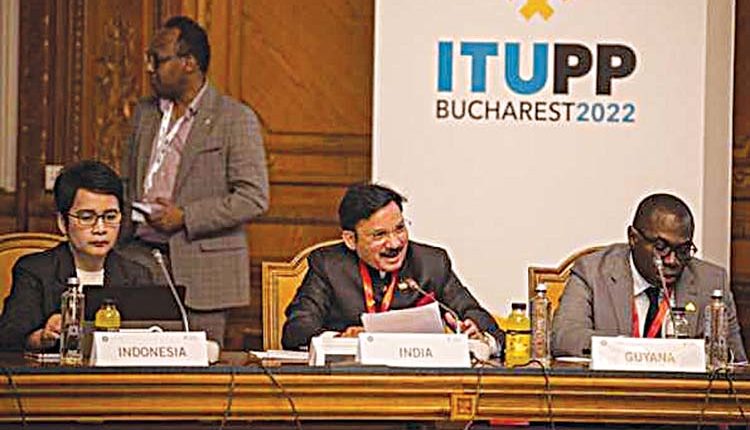 Bucharest, Sep 27 (Representative) Minister of State for Communications Devusinh Chauhan has participated in the Ministerial Roundtable, which is part of Plenipotentiary Conference 2022 of International Telecommunication Union (ITU), here in Romania. The theme of the conference was “Building Better Digital Future”. The conference was happened on Sunday. Speaking on the occasion, he highlighted the integrated approach of the Government of India under the leadership of Prime Minister Narendra Modi for facilitating better and inclusive digital future. He mentioned that better digital future can only be built on pervasive digital infrastructure, developing digital platforms for delivery of government services to every citizen and ensuring access to digital services to all. He said that they have ticked all the necessary check boxes. Citing the examples of commitment of Government in building telecom infrastructure, Devusinh Chauhan indicated that the Government of India has made a plan to extend the mobile services to all 6,40,000 villages of the country by 2023 and Optical Fibre by 2025.

He mentioned that recent successful 5G spectrum auction, which attracted investment of 1.5 lakh crores, indicates a very enthusiastic response from the industry. It is the result of citizen centric and industry friendly public policies and also indicator of their positive outlook towards India’s future, he added. Shri Chauhan highlighted the success of Digital India Initiative undertaken by Prime Minister Shri Narendra Modi. He cited the success of Aadhar and Aadhar Enable Payment System (AEPS). It was apprised to the august house that every day, 400 million transactions have been taking place of AEPS, which is a fine example of financial inclusion effected through development of digital infrastructure. He also mentioned that to reach to the unconnected, India has set up 5,70,000 Common Service Centers in remote and rural areas, which ensure delivery of various Government-to-Citizen (G2C) and other citizen-centric e-Services. He said that India is ready to share its best practices with world. Shri Devusinh Chauhan also solicited the support of member countries for India’s re-election in ITU Council and also for the election of Mrs M Revathi as Member of Radio Regulation Board.

Later on, the Minister of State for Communications also addressed the heads of the Common Wealth Telcom Organization. He said that massive penetration of ICT in all aspects of life is leading to multidimensional changes in India. These initiatives have been taken in accordance of the philosophy of “Antyodaya” of the Government of India under the Prime Minister of Shri Narendra Modi. We are committed to uplift the persons at the bottom of socio-economic pyramid and telecom has kay role to play. He also mentioned that India has been contributing to the Goals of ITU since 1869 and will take all steps to fulfil Sustainable Development Goals 2030. He said we believe in principle of “Vasudheva Kutumbkam” and therefore we work for the welfare of entire humanity. He offered India’s expertise in bridging the digital divide to the CTO nations. Shri Chauhan called for further collaborations among the CTO nations.

Come Fall In Love: Actors speak on how musical is creating history