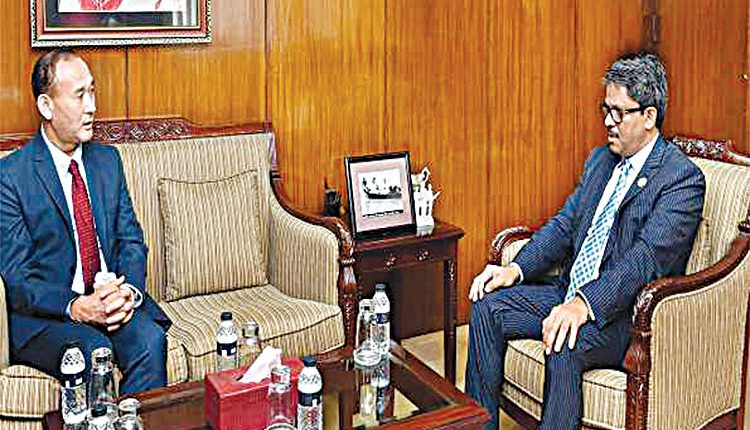 Dhaka, Jan 11 (Agency) Bangladesh State Minister for Foreign Affairs, Md. Shahriar Alam received the newly appointed Secretary General of BIMSTEC Tenzin Lekphell while the latter paid a courtesy call on him at his office on Monday. The State Minister expressed his satisfaction on his appointment as the third Secretary General of BIMSTEC nominated by Bhutan, the first country to recognize Bangladesh as an independent country. Alam expressed hope that the Secretary General will be able to play a pivotal role as a bridge among member states by thriving hard to achieve goals through effective implementation of the necessary agreement.

During the meeting Alam stated that BIMSTEC region has huge prospects for economic cooperation since much of the potential still remains unexplored and unexploited. He emphasized on the importance of making all entities of BIMSTEC fully functional and operational. He added that BIMSTEC process needs concerted and quicker efforts and more intense engagements amongst the Member States for bringing out the best possible results for the mutual benefits of the peoples of the region. Alam stated that Bangladesh, as the BIMSTEC lead country for Trade, Investment and Development, is strongly committed to strengthen BIMSTEC Cooperation in this important field. He added that as a founding member of BIMSTEC, Bangladesh government is pledge bound to deepening relations with BIMSTEC member states in all aspects and to strengthen the BIMSTEC Secretariat in all possible means as well.

Bangladesh has already taken necessary steps to build a new premise for the Secretariat, he further added. The new Secretary General of BIMSTEC expressed pleasure that he is starting his work in Bangladesh as the Secretary General of BIMSTEC. He thanked the State Minister for meeting him and appreciated the warm hospitality extended to him in Bangladesh. He expressed his strong conviction to work for strengthening BIMSTEC by enhancing the level of cooperation amongst the member states.